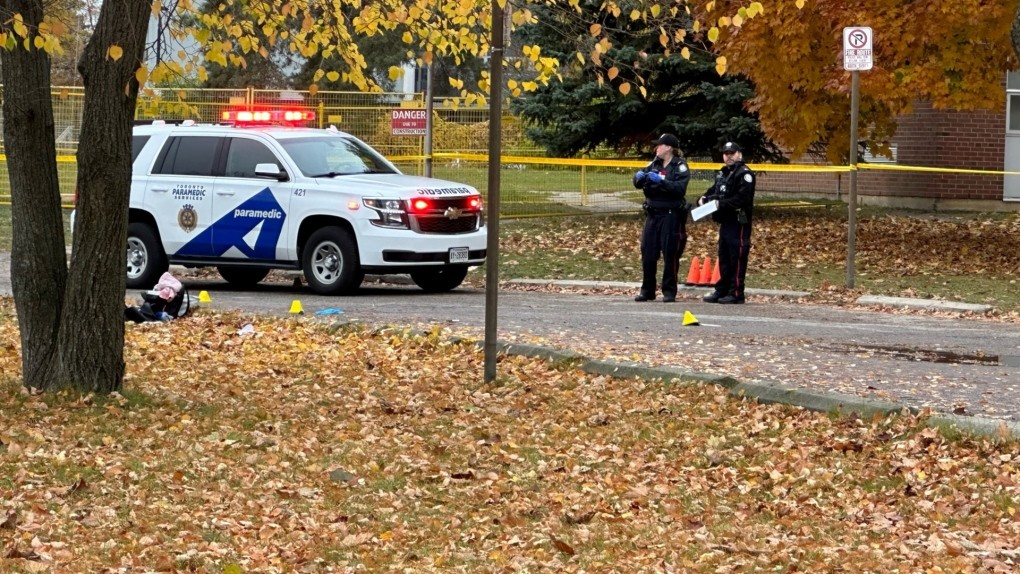 One person is dead and another is in hospital after a shooting outside Woburn Collegiate Institute in Scarborough Monday afternoon, police confirm.

Police say the shooting happened just before 3:30 p.m. in the school’s front yard.

A male victim was located with gunshot wounds and was transported to a trauma centre in life-threatening condition. He was later pronounced dead in hospital.

The second victim, a teenage boy, was also transported to a trauma centre via emergency run after bringing himself to a local hospital, police say. His condition is unknown.

Toronto Police Service (TPS) duty inspector Lori Kranenburg told media at the scene that both victims are believed to be teenagers but she could not confirm if either victim was a student at Woburn Collegiate.

“It appears that there were several shots fired, but I don’t have an exact number. At this time we’re reviewing video and canvassing the area,” Kranenburg said.

Woburn Collegiate was initially placed under a lockdown while police conducted a sweep of the premises.

However, at around 4:30 p.m. police began escorting students out of the building.

So far no arrests have been made.

Kranenburg said that police do not have an up-to-date suspect description, however the suspect was previously described as a Black male wearing a black jacket and a COVID-19 mask.

A number of politicians expressed their condolences on social media Monday evening.

Mayor John Tory said in a statement posted on Twitter that he was angry to find out “gunfire erupted in the middle of the afternoon in the shadow of a school.”

It is terrible to know today’s fatal shooting occurred in front of Woburn Collegiate.

As Mayor, I am so angry to know gunfire erupted in the middle of the afternoon in the shadow of a school. pic.twitter.com/uqwL9gXRNF

Former Toronto police chief Bill Blair, who is now the federal minister of public safety and member of Parliament for Scarborough Southwest tweeted that his “heart goes out to all those impacted by this horrible tragedy.”

Today, an act of gun violence took place at Woburn Collegiate Institute in Scarborough that resulted in the death of one individual and left another injured. As the @TorontoPolice continue their investigation, my heart goes out to all those impacted by this horrible tragedy.

TPS is asking anyone with information or cellphone/dash-cam footage from the area to contact police.

Related Topics:CanadaScarboroughshooting outside Toronto high schoolWoburn Collegiate Institute
Up Next

B.C: Canal Flats selected its mayor by pulling a name from a box