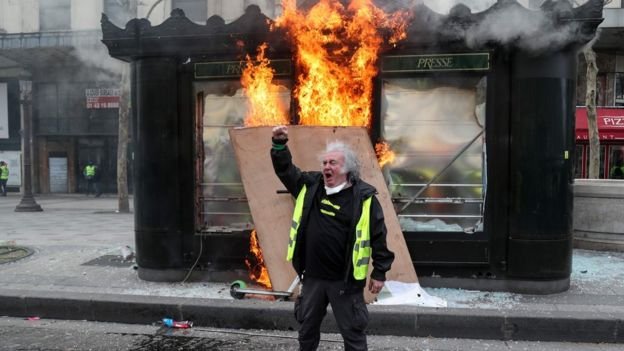 Demonstrators have looted shops in Paris in a resurgence of the Gilets jaunes (“yellow vest”) protests that have been taking place across France for 18 weeks.

They began over fuel tax rises but have developed into a revolt again elitism.

Police used water cannon and tear gas to disperse the protesters, who had dwindled in numbers in recent weeks before Saturday’s uptick.

As well as a surge in numbers on Saturday, there was a return to the levels of violence that characterised some of the earlier protests. Shops including a Boss menswear store were ransacked and fires were lit in the streets, with at least one car set ablaze.

Interior Minister Christophe Castaner said he had given an order to respond to the “unacceptable attacks with the greatest firmness”.

“Let there be no doubt: they are looking for violence and are there to sow chaos in Paris,” Mr Castaner said in a tweet.

In January, the government ordered police to crack down on violence in the protests, leading to complaints of police brutality.

President Emmanuel Macron offered concessions to the protesters after the movement swept the nation – including $11bn designed to boost the incomes of the poorest workers and pensioners – but they failed to quell the discontent.

For the past month, Mr Macron has toured France, listening to local mayors and citizens as part of his “grand débat” – a big national debate. He has also asked communities to come together and put forward their ideas for how to fix France, and there have so far been 8,253 local meetings.

The yellow vest movement has faced accusations of anti-Semitism in recent weeks after a prominent Jewish philosopher, Alain Finkielkraut, was targeted by insults and taunts in Paris.

Officers in Paris intervened to form a barrier after a group of individuals involved in the march confronted Mr Finkielkraut and started verbally insulting him.

The 69-year-old academic told Le Parisien newspaper that he heard people shouting “dirty Zionist” and “throw yourself in the canal”.

A few days before Mr Finkielkraut was attacked, official data suggested there had been a 74% rise in anti-Semitic attacks in France last year.