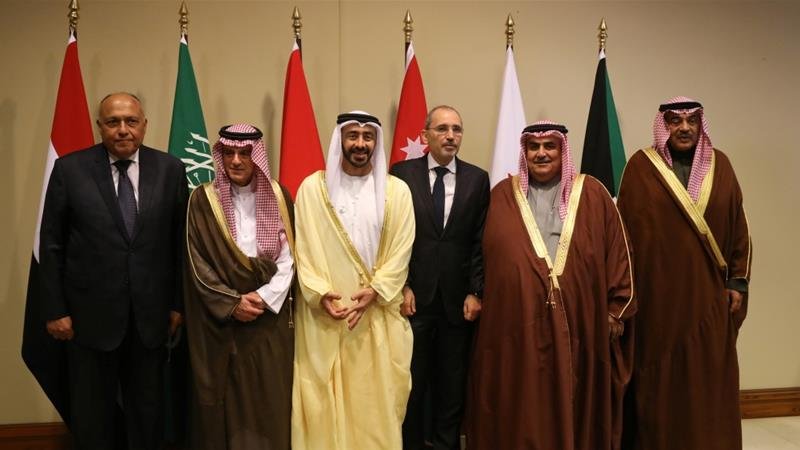 Six Arab foreign ministers have held a “consultative meeting” in Jordan on Thursday in a bid to unify their stances on regional crises, the Jordanian foreign minister has said.

Prior to the meeting, Jordanian Foreign Ministry Spokesperson Sufian Qudah said the ministers would discuss bilateral relations and regional developments.

They met Jordan’s King Abdullah II, who urged “the importance of coordinating Arab positions on regional issues”, according to the royal court.

King Abdullah also stressed the need for ending the Israeli-Palestinian conflict based on the two-state solution and the Arab Peace Initiative, and in a way that guarantees the establishment of an independent Palestinian state on the pre-1967 lines, with East Jerusalem as its capital, The Jordan Times reported.

The Dead Sea meeting comes as countries in the Middle East are showing a growing willingness to reconcile with the government of Syrian President Bashar al-Assad, and amid reports that Damascus could be re-admitted to the Arab League during this year’s summit to be held in Tunisia in March.

Last month, the UAE reopened its embassy in Damascus and Jordan appointed a charge d’affaires at its embassy.

Meanwhile, the feud between four Arab countries and Qatar continues. In June 2017, Saudi Arabia, the UAE, Bahrain and Egypt severed diplomatic and trade ties with Qatar, accusing it of supporting terrorism, a charge that Doha denies.

Jordan and Kuwait have so far remained neutral in the feud.

Children ‘dying from hypothermia’ at camp in Syria

Palestine launches bid for full UN membership despite US veto