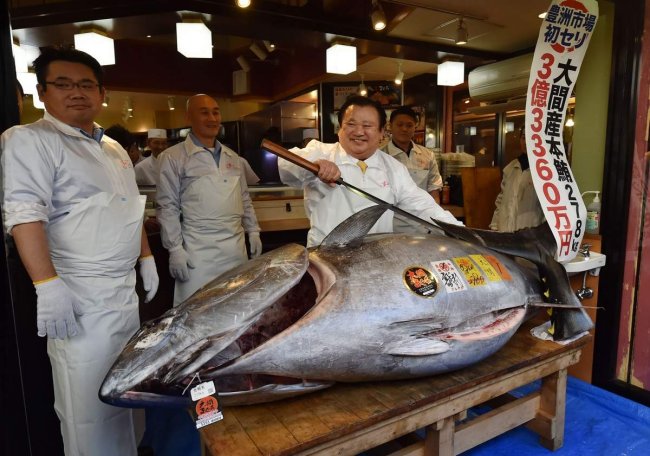 A Japanese sushi boss has paid a record $3.1m for a giant tuna at the first new year’s auction in Tokyo’s new fish market.

Wholesalers and sushi company owners often pay high prices for the best fish at the first pre-dawn auction of the new year.

“I bought a good tuna,” Mr Kimura told AFP after the auction.

“The price was higher than originally thought, but I hope our customers will eat this excellent tuna.”

Mr Kimura has been the highest bidder at the new year auction for seven of the past eight years.

The 2019 auction is the first new year sale to take place at the new fish market on the site of a former gas plant in Toyosu, which opened in October.

The previous site at Tsukiji opened in 1935 and became the world’s biggest fish market and a popular tourist attraction.

However issues including concerns about outdated fire regulations and hygiene controls prompted the market to be moved to a larger and more modern site.

The International Union for Conservation of Nature’s Red List of Threatened Species says Atlantic Bluefin are endangered while the Pacific Bluefin are vulnerable.

The country said it would withdraw from the International Whaling Commission (IWC), which banned commercial whaling in 1986 after some species were driven almost to extinction.

Conservation groups have warned that the move will have serious consequences.