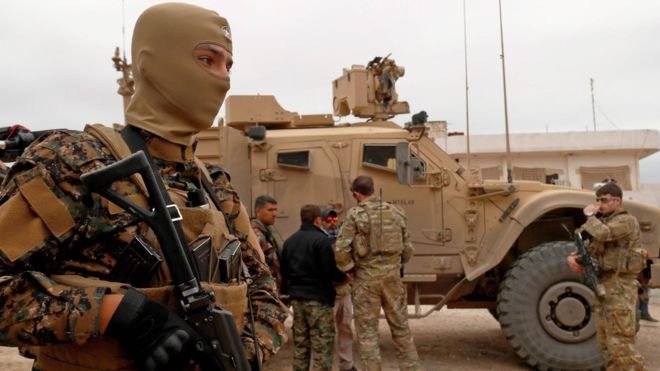 United States troops are being withdrawn from Syria, after President Trump said the Islamic State (IS) group had been “defeated” there.

The Pentagon said it was transitioning to the “next phase of the campaign” but did not give details.

Some 2,000 troops have helped rid much of north-eastern Syria of IS, but pockets of fighters remain.

It had been thought defence officials wanted to maintain a US presence to ensure IS did not rebuild.

There are also fears a US withdrawal will cede influence in Syria and the wider region to Russia and Iran.

Both the Pentagon and the White House statement said the US had started “returning United States troops home as we transition to the next phase of this campaign”.

The Pentagon said it would not provide further details of what that next phase is “for force protection and operational security reasons”.

The White House said the US and its allies stood “ready to re-engage at all levels to defend American interests whenever necessary, and we will continue to work together to deny radical Islamist terrorists territory, funding, support and any means of infiltrating our borders”.

We have defeated ISIS in Syria, my only reason for being there during the Trump Presidency.

US troops have largely been stationed in the Kurdish region in northern Syria.

A partnership with an alliance of Syrian Kurdish and Arab fighters, known as the Syrian Democratic Forces, is credited with playing a major role in the virtual elimination of IS after it overran large swathes of Syria four years ago, imposing brutal rule on almost eight million people in the country and neighbouring Iraq.