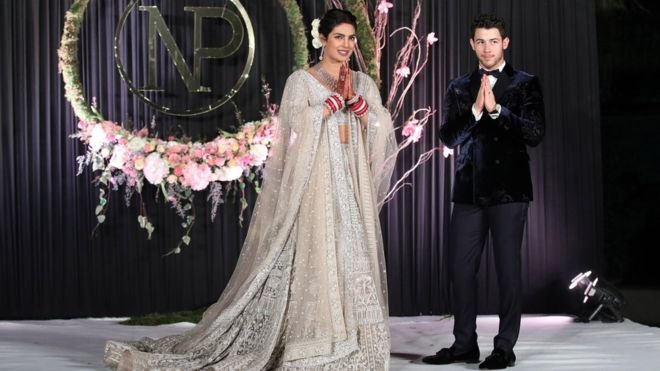 Indians on social media are rallying behind Bollywood star Priyanka Chopra after an American website article called her a “scam artist”.

The article in The Cut, which has now been taken down, sparked outrage for suggesting that she had trapped US singer Nick Jonas into marrying her to further her career.

Indians, many of whom were earlier disparaging about the wedding, have now jumped to defend her.

Many said the article was racist.

In a way, the piece has marked a turning point in the entire saga of the couple in India – from feeling very much “over it” when it came to wedding updates, there is now a rush to defend Chopra.

Even those who felt that the wedding was “extra” – thanks to features like Chopra’s 75ft veil which needed a team of people to carry it- are up in arms.

This article has forced me into the extremely uncomfortable corner of feeling stirrings of defensiveness about Priyanka. (There’s extremely a story to be written about the relevance stakes of having a wedding for for the sponcon but this ain’t it chief) https://t.co/va5gYmUYMK

I am not a fan of either of the people in this relationship but this is some WHACK, insanely offensive writing on Priyanka Chopra https://t.co/rdxifLYeDE

When news first broke about the Bollywood star dating Jonas, many Indians were unimpressed. Quite apart from the fact that many in the country did not know who Jonas was, people cringed at their constant social media PDA (public demonstrations of affection).

This continued as their big day inched closer – many rolled their eyes at the almost relentless social media chatter around the couple in the lead-up to their wedding in the Indian state of Rajasthan.

No amount of (very clearly staged) wedding photos will convince me that Priyanka and the JoBro are a real couple. Sorry I just don’t buy it.

All weddings are performances but especially this one send tweet https://t.co/Q1q8HDTw6s

Ariana Grande Says She Wrote ‘Thank U, Next’ After a ‘Pretty Rough Day in NYC’