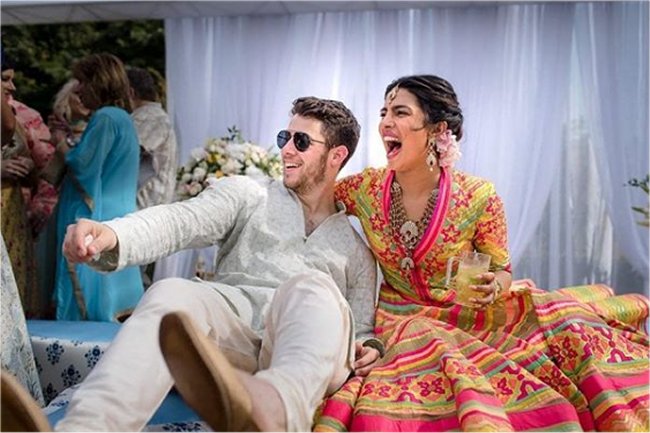 Nick Jonas and Priyanka Chopra have married in a Christian ceremony at a royal palace in India.

The Bollywood superstar and the Texan singer, formerly part of the Jonas Brothers, wed before family and friends in Jodhpur’s Umaid Bhavan Palace.

People magazine said the ceremony was officiated by Jonas’s father Paul Kevin Jonas. The couple will have a traditional Hindu ceremony on Sunday.

Jonas and Chopra became engaged four months ago after dating for a year.

They both confirmed the wedding had taken place on their respective social media accounts.

One of the most special things that our relationship has given us is a merging of families who love and respect each other’s faiths and cultures. And so planning our wedding with an amalgamation of both was so so amazing. An important part for the girl in an Indian wedding is the Mehendi. Once again we made it our own and it was an afternoon that kicked off the celebrations in the way we both dreamed. @nickjonas

They said “one of the special things” about their relationship was the merging of their families, faiths and cultures “and so planning our wedding with an amalgamation of both was so so amazing”.

Jonas, 26, and Chopra, 36, are believed to have first started dating around the time of the Met Gala in May 2017. They got engaged in London just over a year later.

Chopra won the Miss World pageant in 2000 and went on to make more than 50 films in India, becoming one of Bollywood’s highest-paid actresses.

One of the most special things that our relationship has given us is a merging of families who love and respect each other’s faiths and cultures. And so planning our wedding with an amalgamation of both was so so amazing. pic.twitter.com/KcTD5D4MAw

Time magazine named her as one of the 100 most influential people in the world in 2016, while Forbes magazine included her in a list of the world’s 100 most powerful women last year.

Chopra broke in to acting in the US with a part in the TV series Quantico and film roles in Ventilator, Baywatch and A Kid like Jake.

She was a guest of Meghan Markle at her wedding to Prince Harry earlier this year.

Jonas was part of a band with his brothers Joe and Kevin and got a big following on the Disney Channel through films such as Camp Rock.

He has since gone solo, with hits including Levels, Jealous and Chains, and was a mentor alongside Demi Lovato on The X Factor.

Ariana Grande Says She Wrote ‘Thank U, Next’ After a ‘Pretty Rough Day in NYC’