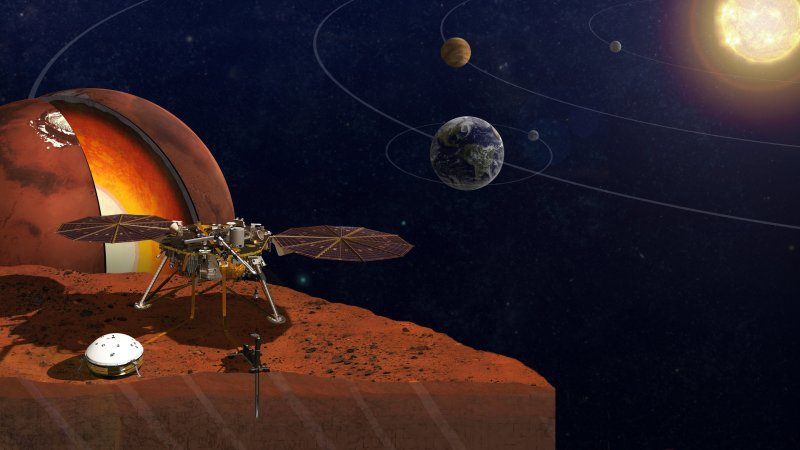 US space agency Nasa has landed a new robot on Mars after a dramatic seven-minute plunge to the surface of the Red Planet.

The InSight probe aims to study the deep interior of Mars, and make it the only planet – apart from Earth – that has been examined in this way.

The touchdown confirmation came through shortly after 19:50 GMT.

It ended an anxious seven minutes in which the robot radioed home updates on its descent.

Nasa’s mission control in California erupted with delight when it became clear InSight was safe on the ground.

The probe landed safely on a flat plain known as Elysium Planitia, close to the Red Planet’s equator.

Engineers are currently awaiting a health report and a picture from the probe that shows its surroundings.

These should be returned to Earth in the next few hours.

Like all previous landing attempts at Mars, Insight’s race to the surface – the first attempt since 2012 – was a tense affair.

Stage by stage and metre by metre, the robot reported back its progress.

It had entered the atmosphere faster than a high-velocity bullet, using the combination of a heatshield, parachute and rockets to bring itself to a gentle stop.

Key to InSight’s continued survival on the harsh surface of Mars is the deployment of its solar panels, which were stowed for the descent.

The robot absolutely has to start generating power to operate its systems and to warm equipment in the sub-zero temperatures that persist on the Red Planet.

Only when these immediate concerns are taken care of can Nasa begin to think about InSight’s scientific mission.

What is different about this mission?

This will be the first probe to dedicate its investigations to understanding Mars’ interior.

Scientists want to know how the world is constructed – from its core to its crust. InSight has three principal experiments to achieve this goal.

The first is a package of Franco-British seismometers that will be lifted on to the surface to listen for “Marsquakes”. These vibrations will reveal where the rock layers are and what they are made of.

A German “mole” will burrow up to 5m into the ground to take the planet’s temperature. This will give a sense of how active Mars still is.

And the third experiment will use radio transmissions to very precisely determine how the planet is wobbling on its axis. Deputy project scientist Suzanne Smrekar uses this analogy: “If you take a raw egg and a cooked egg and you spin them, they wobble differently because of the distribution of liquid in the interior. And today we really don’t know if the core of Mars is liquid or solid, and how big that core is. InSight will give us this information.”

Scientists understand very well how Earth’s interior is structured, and they have some good models to describe the initiation of this architecture at the Solar System’s birth more than 4.5 billion years ago. But Earth is one data point and Mars will give researchers a different perspective on how a rocky planet can be assembled and evolve through time.

InSight chief scientist Bruce Banerdt said: “The small details in how planets evolve are what we think make the difference between a place like Earth where you can go on vacation and get a tan, and a place like Venus where you’ll burn in seconds or a place like Mars where you’ll freeze to death.”

To Predict the Future, the Brain Uses Two Clocks