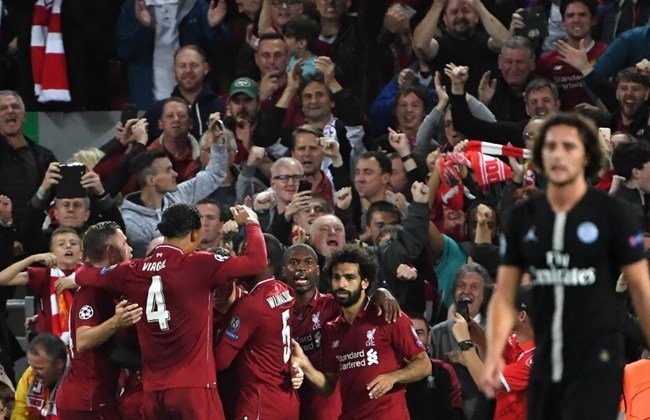 Liverpool turned the page on defeat in May’s Champions League final and showed why they are even stronger candidates to win a sixth European Cup this season as they launched their campaign in style against Paris Saint-Germain. The home side left it late to seal the win at Anfield Tuesday, with Brazil’s Roberto Firmino coming off the bench to edge a five-goal thriller 3-2 in stoppage time.

But the score line did not reflect the gap in quality between Jurgen Klopp’s well-honed unit and a PSG side that still looks like a collection of star individuals.

PSG fielded a $525 million frontline of Neymar, Kylian Mbappe and Edison Cavani, but once again on a Champions League night away from the French capital the visitors wilted.

“Football still has the capacity to make the richest of men seem very foolish if they pursue glamor at the expense of substance,” was the verdict of Britain’s Guardian newspaper.

Despite their shortcomings, the sheer amount of individual star quality should still ensure PSG have enough to see off Napoli and Red Star Belgrade to make the last 16.

Even though he was kept quiet for almost the entire 90 minutes, Mbappe seized the one big chance that came his way to make it 2-2 seven minutes from time.

But on this evidence, only one team from Group C look like serious contenders to end Real Madrid’s dominance of the Champions League in the Spanish capital next June.

“It’s true we expect a lot from our front three and perhaps today it was tough for them. We have to improve all over the field,” PSG boss Thomas Tuchel admitted.

“Maybe we need to improve our intensity in games like this but it is early days in the Champions League and there is time to improve.”

Much has been made of Liverpool’s own strengthening in the transfer market to turn the progress made under Klopp into trophies.

Yet, other than goalkeeper Alisson Becker, who did not make a save of note, Klopp included no summer signings in his starting lineup.

Liverpool rode the firepower of their own fantastic front three of Firmino, Mohamed Salah and Sadio Mane to reach the final last season.

But aside from the Brazilian’s late intervention, it was the more unsung heroes of Jordan Henderson, James Milner and Georginio Wijnaldum who controlled the game in midfield.

Milner scored the penalty won by Wijnaldum for Liverpool’s second and dispossessed Mbappe to set up Firmino’s winner. “We look now much more tuned than it maybe was in the past,” Klopp said.

“We played a midfield who played a lot of times last season together, that was the reason for that performance. The three in midfield did an outstanding job.”

By the time Liverpool got to Kyiv in May they were running on empty as a thin squad ran out of gas, particularly when talisman Salah was forced off early by injury.

When Klopp looked to his bench he had Adam Lallana and Emre Can on their return from injury, Alberto Moreno, Nathaniel Clyne, Dominic Solanke and Ragnar Klavan to choose from.

Tuesday he had Firmino, having not felt pressured to field him from the start due to Daniel Sturridge’s return to form and fitness, along with more than 100 million pounds ($131 million) worth of signings in Naby Keita, Fabinho and Xherdan Shaqiri.

“It’s the moment when you have to show faith in the squad,” Klopp said. “When you have Bobby Firmino available, you actually always think ‘come on, bring him,’ but it was nice to see how Daniel performed tonight and he paid 100 percent back.”

That strength in depth will be needed to maintain a bid for both a first Premier League title in 29 years and Champions League glory.