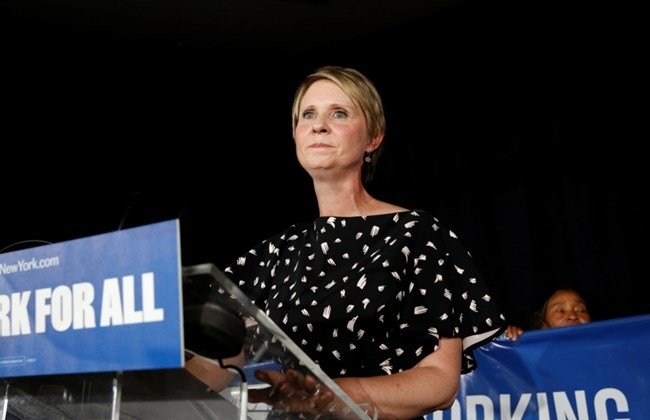 Andrew Cuomo, 60, in office since 2011 and who commanded a huge war chest from powerful donors, batted aside her insurgent bid at 66-34 percent, US media projected not long after the polls closed.

The result puts him on course to win a third term as chief executive of America’s fourth most populous state, which leans heavily Democrat, in the general election on November 6.

The 52-year-old mother of three dived into the race in March, in a bid to become the first woman and first openly gay governor, demanding change and supporting a raft of left-of-center hot-button issues.

Neither Cuomo nor Nixon made any immediate public comment after US media called the race.

Lower down the ticket, the candidate Nixon endorsed as lieutenant governor, Jumaane Williams, a 42-year-old city councilman from Brooklyn, was narrowly ahead of incumbent Kathy Hochul in a race that was considered too close to call by US media.

“He is an experienced man and she is totally inexperienced,” explained Cuomo voter Jack Buchanan, 87, on Manhattan’s Upper East Side.

“We already have a totally inexperienced guy in the White House, so why put one in Albany?” he added in reference to the state capital and President Donald Trump, who is hugely unpopular in the city.

“I don’t think she’s qualified,” Nixon voter Jill Vexler told AFP in Union Square, confessing it had been “more of a sympathy vote.”

Nixon had hoped to ride the crest of other upset victories by political first-timers in Democratic Party primaries for congressional seats in places like New York and Boston.

Yet she headed into Thursday’s vote trailing Cuomo in every single demographic group, the governor leading 63-22 percent, up from 60-29 percent in late July, according to the latest poll from Siena College.

Winning state-wide is a much tougher gambit than a congressional seat, especially for a first-timer up against the well-oiled and well-funded machinery of a sitting governor.

“To break through, that requires a lot of money and organization,” said Michael Miller, professor of political science at Barnard College. “A lot of people would be surprised if she did pull it off,” he told AFP.

Cuomo, the son of a governor who married a daughter of Robert F Kennedy and had three children before they divorced, traded hard on his record on gun control, gay marriage and the minimum wage.

Said to harbor presidential ambitions, he is a long-time political operator who served as a cabinet secretary under Bill Clinton at the tender age of 39.

“Andrew Cuomo has outspent us 10 to one which says to me that he is really scared,” Nixon told supporters in Union Square earlier on Thursday, where queues formed to take a picture with her.

“Our voters are really pumped to get out and vote today and to get everybody they know out to vote, and in the end that’s what counts.”

The final home stretch of the race degenerated into ugly spats. She denounced as a smear campaign a Democratic Party mailer that implied she was anti-Semitic, to which Cuomo pleaded ignorance.

Then she sailed into controversy and free column inches of her own with a bagel order that incensed almost everyone, an incongruous lox, cream cheese, tomatoes and capers — on a cinnamon and raisin bun.