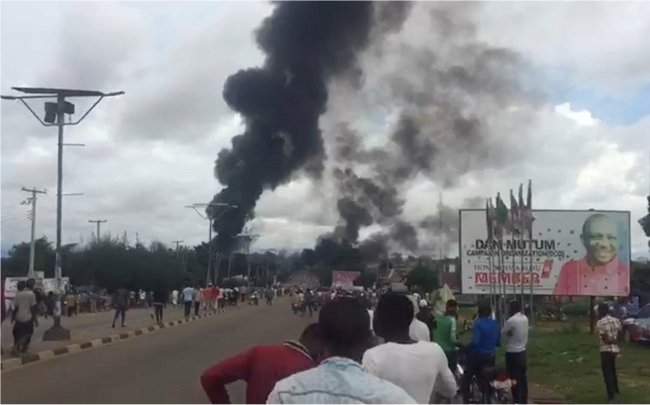 Nine people were killed and dozens more injured, some of them critically, in an explosion and fire at a gas filling station in central Nigeria, the state governor said on Tuesday.

The accident happened on Monday in Lafia, the capital of Nasarawa state, 190 kilometers by road east of Abuja.

“At the moment, we have recorded nine deaths as against the large figures being speculated in the media,” Nasarawa governor Tanko Almakura told reporters at the scene.

Of the injured the worst affected had been taken to Abuja for treatment for severe burns, he added.

Conflicting tolls of dead and injured are not unusual in Nigeria and getting corroboration of figures is often problematic.

“Two people were killed on the spot while one person later died in the hospital,” said the member with the Federal Road Safety Corps (FRSC).

Thirty-two people were taken to hospital “with many of them in critical condition with severe burns”, he said on condition of anonymity as he was not authorised to speak to the media.

An AFP photographer at the scene said many vehicles and some nearby houses were gutted in the inferno.

Firefighters alerted to the initial leak have said they were unable to prevent the blast, which witnesses said was the first of its kind in the city.

Households in Nigeria and wider West Africa rely on bottled gas for cooking but accidents caused by improper storage, refilling or lax safety procedures are commonplace.

Officials say the location of gas filling stations in residential areas is responsible for most accidents.

In one incident in 2015, nine people were killed in a blast in the southeastern town of Nnewi as they filled cooking gas cylinders on Christmas Eve.

Ibrahim Balarabe-Abdulallahi, the speaker of Nasarawa House of Assembly, said: “The station should be on the outskirts of the city.

“We are going to come with a law to stop this kind of business in the heart of the city,” he told reporters.

It was the ninth such incident in the country in three years.