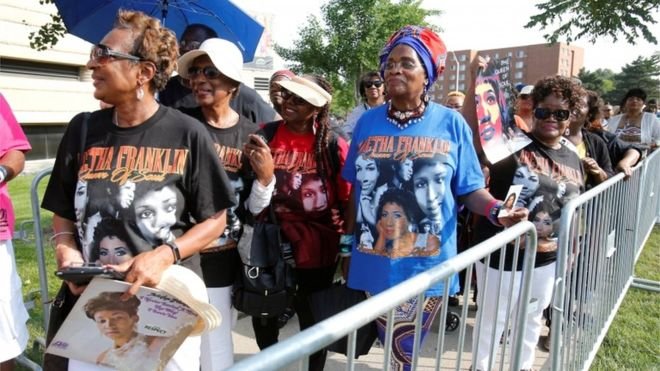 Thousands of fans are expected to pay their respects to Queen of Soul Aretha Franklin, who died nearly two weeks ago.

Franklin’s body will be on view for two days at an African-American museum in her home town, Detroit, before her funeral there on Friday.

Detroit, seen as the home of soul music, is treating Franklin’s death as the passing of royalty.

A week of mourning is being held in the city.

The 76-year-old’s body will be on public view on Tuesday and Wednesday at the Charles H Wright Museum of African American History.

The venue was reportedly chosen because Rosa Parks’s viewing took place there in 2005 and because it needs to accommodate the thousands of people expected to attend.

Friday’s funeral at the Greater Grace Temple is for family and friends only, but Chaka Khan, Jennifer Hudson and Stevie Wonder are among those due to sing there.

Former US President Bill Clinton will be among the speakers.

This is a MUST LISTEN. @ADavMusic singing a little respect. She sang for #ArethaFranklin last year and will perform at Thursday’s tribute concert. Breathtaking. SOUND UP LOUD. RT pic.twitter.com/cL7eVvnT2o

The streets outside are expected to be lined with pink Cadillac cars, in a tribute to Franklin’s 1985 hit Freeway of Love.

The singer will then be laid to rest at the city’s Woodlawn Cemetery.

Franklin, whose voice became an inspiration for dozens of other singers, was also committed to civil rights throughout her life and famously sang at President Obama’s inauguration in 2009.

The big release of “The Nun”