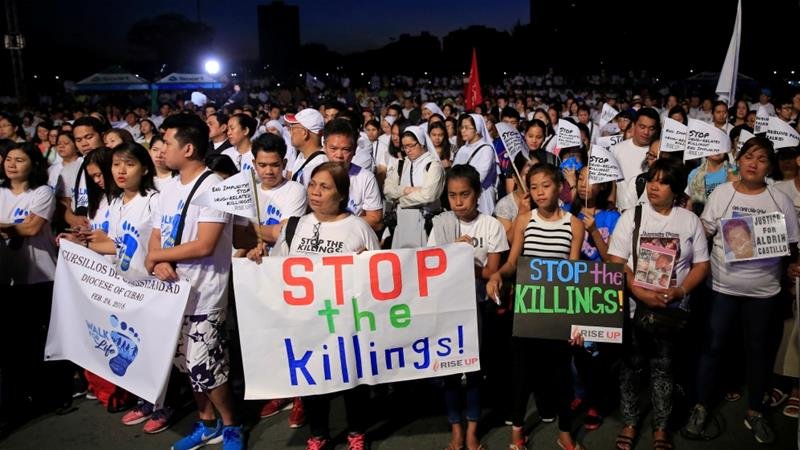 Demonstrators have taken to the streets of Manila to protest Philippine President Rodrigo Duterte’s drug war, which has left thousands of people dead, and to express their opposition to plans to change the Constitution.

Catholic groups held a predawn “walk for life” on Saturday against the drug killings, as well as the proposed restoration of the death penalty.

In his message, Luis Antonio Tagle, the cardinal of Manila, denounced the growing “throwaway culture”, which he said has left many “casualties” including human lives.

“We will not tire in walking for life even if the path ahead is winding and soaked in blood,” Tagle said in Filipino, without directly referring to Duterte’s drug war.

The church-led protest took place as the country celebrated the anniversary of the 1986 popular revolt, which deposed Philippine dictator Ferdinand Marcos and ended his 20-year rule.

Since Duterte came into office in 2016, the Catholic church has emerged as one of the most vocal critics of his deadly anti-drug policy.

The death toll in the drug war already surpassed 20,000 in the first 20 months of the Duterte presidency, according to an opposition senator.

In a video clip posted by online news site Rappler, Manila Bishop Broderick Pabillo said Filipinos should not be indifferent, whether the number of drug war deaths is big or small.

“It’s not about the numbers, because the policy continues,” Pabillo told reporters. “If we are not vigilant, it’s possible that the killings will escalate. So we should not ignore this.”

More than 80 percent of the 101 million Filipinos are Catholics. But Duterte has managed to fend off criticism from the church, calling church leaders “hypocrites”.

Elsewhere in Manila on Saturday afternoon, an assembly of left-wing groups, students, church workers and activists held a separate march calling for “resistance” against Duterte, whom they likened to the dictator, Marcos.

Demonstrators raised their fists as they carried banners denouncing the “dictatorship” and Duterte’s plan to change the Constitution.

“We are here to show that we are capable of fighting the dictator Duterte,” a leader of the march said in a video clip posted on social media.

The protesters partially blocked traffic along the route of the march.

On Friday, thousands of students across the country also joined a school walkout.

Harry Roque, spokesman of the president said, the anti-government protests are proof that “democracy and freedom are very much alive in the Philippines.”

Meanwhile, thousands of uniformed police officers, their family members and supporters held a counter-march near the national police headquarters in Manila in support of the Duterte’s drug war.

“Fight and defeat drugs,” read one banner carried by the demonstrators.