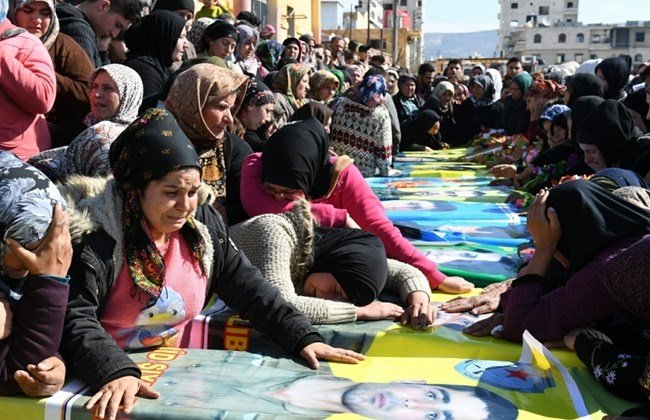 Syrian Kurdish forces and the Damascus government have reached an agreement for the Syrian army to enter the Afrin region to help repel a Turkish offensive, a senior Kurdish official told Reuters Sunday.

The announcement came as regime forces readied Sunday for a ground offensive against the rebel-held enclave of Eastern Ghouta, as residents of the capital braced for retaliatory shelling.

Badran Jia Kurd, an adviser to the Kurdish-led administration in north Syria, said army troops will deploy along some border positions and could enter the region within the next two days.

Syrian President Bashar Assad’s government has had a complex relationship with the Kurdish YPG militia during the conflict. They have mostly avoided direct conflict and both sides have at times suggested a long-term agreement between them might be possible, but they have also sometimes clashed and espouse utterly different visions for Syria’s future. Assad has said he wants to take back control of the whole country.

Jia Kurd said the agreement that had been reached with Damascus was purely military and that no wider political arrangements had been made yet.

“When it comes to the political and administrative matters in the region, it will be agreed upon with Damascus in the later stages through direct negotiations and discussions,” he said.

He added that there was opposition to the deal that could prevent it being implemented. “We don’t know to what extent these understandings will last because there are sides that are not satisfied and want to make [the understandings] fail.”

The agreement underscores the increasingly complex situation in northern Syria where Kurdish groups, the Syrian government, rebel groups, Turkey, the United States and Russia are tangled in a complex web of enmities and alliances.

A Kurdish political official familiar with the negotiations for the Syrian army to enter Afrin said it was possible Russia would object to the agreement as complicating its own diplomatic efforts with Turkey.

The last rebel bastion near Damascus, Eastern Ghouta is held by two main Islamist factions, Jaish al-Islam and Faylaq al-Rahman, although militants also have a foothold there.

The regime is keen to regain control of the area to halt the deadly salvo of rockets and mortars that those factions have fired on the capital. An AFP correspondent in Damascus said six rockets hit the capital Sunday.

According to the Observatory, the regime began dispatching military reinforcements to Eastern Ghouta on Feb. 5., the same day it launched a fierce five-day bombing campaign on the region.

Airstrikes have left around 250 civilians dead, with retaliatory rocket fire on Damascus killing about 20, the activist group said.

Abdel-Rahman said negotiations with Russian involvement were taking place for the evacuation of militant faction Hay’at Tahrir al-Sham, whose footprint in Ghouta is limited but includes areas directly adjacent to Damascus.

The Syrian daily Al-Watan, which is close to the government, also reported the talks Sunday.

But rebels have denied the claim, with top Jaish al-Islam figure Mohammad Alloush telling AFP there were no negotiations.“We reserve our legitimate right to defend ourselves. We opened the door for a political solution and participated in negotiations to stop the bloodshed in Syria, but the other side breached these agreements and broke every ceasefire,” he said.

Faylaq al-Rahman spokesman Wael Alwan also told AFP his group had “no correspondence or negotiations with the criminal regime or its allies.”

The government has already cleared swaths of territory around Damascus through local deals, whereby besieged anti-government forces were evacuated and bussed to other rebel-dominated areas.

If a deal is struck for Eastern Ghouta, HTS militants would likely be sent to the northwestern province of Idlib, which is almost completely out of government control. But time appeared to be running out for an agreement Sunday and regime forces, who have been receiving aerial backing from Russia, looked on the brink of starting a major offensive.

“The collapse of the negotiations will signal the start of an assault,” Abdel-Rahman said.

Quake shakes Mexicans out of bed, alarms sound in capital