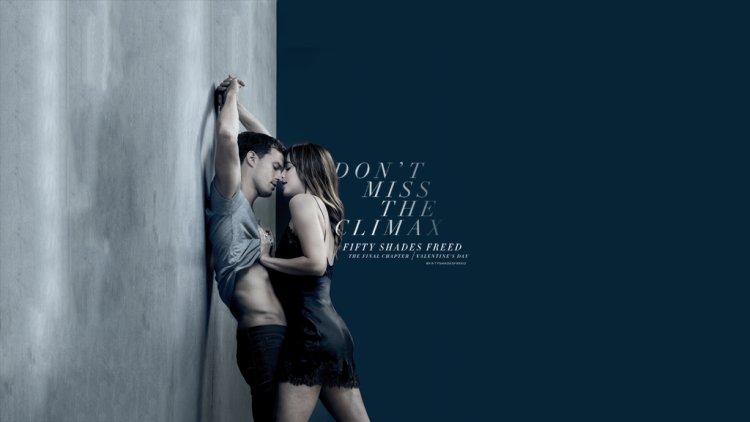 “It’s not casual and it’s not fun,” she explains. “It never got easy.”

The brunette beauty says that there were plenty of uncomfortable moments throughout filming, like the fact that she had to have strapless thongs superglued to her body.

“I had these sort of strapless thongs that had glue on them. It’s not glue, but it’s sticky,” she reveals. “They’re, like, basically if it were a nipple pastie, but underwear. But it’s only sticky at the top, it’s not sticky the whole way. It would also come off because the adhesive would wear out, so then they would superglue it to my body so that it wouldn’t fall off. And I would wear two of them.”

“It’s not painful, I mean, it’s barely anything,” she adds. “But I guess you have some sense of being covered. It’s f**king bizarre.”

While Johnson had to film plenty of difficult scenes for the franchise over the years, she says the hardest one was hands down a Red Room sex scene with Dornan for 50 Shades Freed, which is in theaters now.

“I was handcuffed with my arms and legs to the gate. It’s like a fence thing that comes down. And I was blindfolded,” she recalls. “And it was kind of shocking, because I didn’t realize that no matter how prepared or rehearsed I was, when your senses are taken away like that, you can’t control the way your nervous system will react. So, it was really tricky to navigate that scene. It was kind of difficult.”

Johnson admits that she and Dornan did have some help for the extremely difficult scenes, however.

“Most of [our preparation] is just really figuring out exactly how were are going to accomplish the scene beforehand, so that there’s not a lot of waiting around while we’re both vulnerable,” she says. “But, if something is very, very difficult, it’s sometimes necessary to have a shot of something strong beforehand.”

Earlier this month, ET exclusively caught up with Dornan at the Le Grand Hotel in Paris, France, where he opened up about what it’s like saying goodbye to the character that’s made him a household name.

“It’s tough in some respects, but it’s also really nice and kind of bittersweet, I guess,” he shared. “I think when you finish any movie or TV series or whatever, you’ve invested so much [time] into the character and the job itself and the other actors and the crew.”

“That’s sort of tenfold if it’s a sequel or trilogy of films,” he continued. “For the most part, we had the same crew back [and] obviously the same actors back, so you’re that much more invested in these people and their lives and that much more closer to them. So, it makes it harder to say goodbye.”

The disappointing truth about Dr. Phil

Israel to snub film fest in Paris over contentious movie