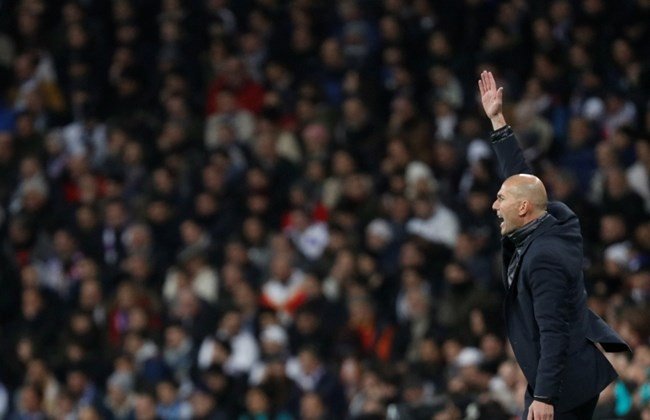 Zinedine Zidane has admitted that coaching Real Madrid is draining as he prepares his side for their return to La Liga action on the back of the Champions League victory over Paris Saint-Germain.

“It is exhausting, for sure, even more so at Real Madrid,” the Frenchman, who had been under considerable pressure prior to the rousing 3-1 win over PSG in the first leg of their last-16 tie, told reporters at the club’s Valdebebas training complex Saturday.

“Of course there could come a time when there needs to be a change, for the coach, the club, the players, everyone, but it is not the moment.”

Zidane has won eight trophies in a hugely successful two years at the helm, including back-to-back Champions Leagues.

His team’s indifferent domestic form – they are fourth in La Liga ahead of Sunday’s game at Real Betis – means his future at the Santiago Bernabeu probably depends on the outcome of the PSG tie, with the second leg in France on March 6.

Before that, Madrid face a run of five league games in 14 days, including a rescheduled trip to near neighbours Leganes next Wednesday.

The gap to league leaders Barcelona – 17 points with a game in hand before this weekend – is surely too great, but they are looking to climb back into the top three in La Liga.

Zidane, who has lost Toni Kroos to a knee injury that could make him a doubt for the PSG return, is set to rotate his squad in these matches and give some fringe players an opportunity.

“It is the best way to prepare for the second leg against PSG, by being good [and] playing well in La Liga,” the Frenchman added, whose side lost 1-0 at home when they last faced Betis, in September.

“There are five matches, and each time we’ll be playing after having just two training sessions. That has not happened to us before and it means we will have even greater need for everyone to be available.

“It would have been good to have another day before [Sunday’s] match, but we don’t.”