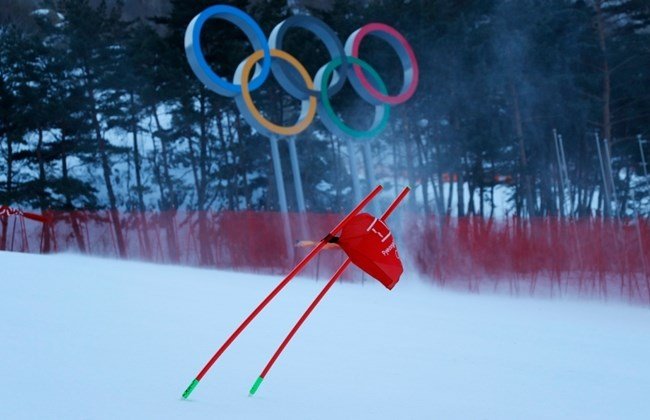 Dangerous winds played havoc with the Pyeongchang Winter Olympics Wednesday, forcing the postponement of two medal events and closing a major area for spectators who were told to stay indoors.

The women’s slalom skiing and a women’s biathlon race were both postponed until later in the week, while the Nordic combined competition was delayed and snowboarders complained of poor visibility as the halfpipe final went ahead in heavy snowfall.

Eight people were injured and taken to hospital after a six-metre tall signboard fell and hit them during a street performance in downtown Gangneung, Yonhap news agency said.

Four straight days of high winds have badly disrupted the Pyeongchang Games. Only one ski race has been held so far: the men’s combined, which was also delayed to allow winds to subside.

Strong winds were also blamed for a farcical women’s slopestyle competition on Monday, when almost all competitors crashed in the heavy gusts.

On Wednesday, conditions were also far from perfect at the men’s halfpipe final where several riders fell, including Japan’s Yuto Totsuka, 16, who was rushed to hospital after a horror wipe-out.

Japanese Olympic officials told AFP the teenager had undergone a CT scan, which revealed no fracture or serious injury, before being released.

Gold medallist Shaun White said he had been “struggling to see blue lines to land on”.

“The pipe itself was great but the light was pretty bad, which made it difficult to land jumps,” said Japan’s Ayumu Hirano, who took silver.

Earlier in the day, the alpine skiing programme – seen by many as the pinnacle of the Winter Games – suffered a third postponement as the women’s slalom fell victim to the blustery conditions.

The men’s downhill skiing was postponed on Sunday for the same reason, as was the women’s giant slalom Monday. Only the men’s combined has been held so far.

According to officials, winds of up to 25 metres per second have made it difficult even to stand in some mountain areas.

However, organisers say they have no concerns about fitting in the 10 remaining gold medal races before the end of the Games on Feb. 25.

“If the wind continues to blow for the next 15 days then I guess it might be a problem,” said International Olympic Committee spokesman Mark Adams.

Separately, the wind caused chaos at Gangneung Olympic Park, where outside stands were damaged and staff struggled to hold down metal-detecting security scanners to stop them being ripped from their fittings.

The area was closed to visitors, with spectators urged to stay indoors. Shops were shut and outdoor activities were cancelled in the area, where there are four ice sports arenas.

“Due to high winds… all activities in the common domain of the Gangneung Olympic Park have been temporarily suspended,” said a statement from Games organisers.

Spectators with tickets were still able to attend sports events but Olympic volunteers with megaphones shouted instructions for other visitors to leave the area, directing them to bus and train transportation.

Temporary structures housing media were also closed, with journalists sent to work in the stadium tribunes instead.

Events at the Olympic Park Wednesday include the women’s ice-hockey match between the unified Korean team and Japan as well as men’s ice hockey, curling and speed skating.

Olympic skiing delays no fun for anyone