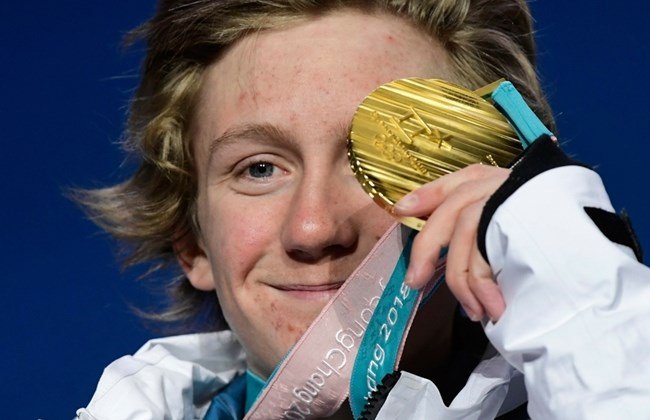 Wild winds disrupted the Pyeongchang Winter Olympics on Sunday as a 17-year-old American snowboarder made history by becoming the first Games gold medalist born this millennium.

Red Gerard, born on June 29, 2000, celebrated a storming win in slopestyle, which also made him the second youngest individual winner in Games history.

“I’m super-psyched!” said Gerard, adding: “I cannot believe it. I’m shaking right now, maybe from the cold or the excitement, I don’t know. But I’m ecstatic. I can’t believe it.”

Slopestyle was one of the events that did not fall victim to high winds on Sunday, when the showpiece men’s downhill skiing was aborted until Thursday following a pre-dawn meeting of ski chiefs.

Later, as the gusts continued to swirl around Pyeongchang, the women’s slopestyle qualification was scrapped with the competitors all going straight into Monday’s final.

A day of extremes started with a surprise earthquake alert, after a 4.7-magnitude quake rattled eastern South Korea, with its epicenter about 260 kilometers from the Games.

South Korea isn’t known for deadly earthquakes, but organizers gave assurances that the Olympic venues had been built to stand up to a major tremor.

“All the facilities in the Games area are built so they can withstand strong earthquakes over 7.0… so I assure you there was no issue regarding these facilities,” said Sung Baik-you, spokesman for the Pyeongchang organizers.

The severe chill which has made Pyeongchang one of the coldest Games in history was set to worsen, with temperatures forecast to plunge to -14 degrees Celsius (7 Fahrenheit) on Monday — with a real-feel of -25C.

“People are advised to dress warmly and wear hats and gloves to keep themselves warm,” warned Sung.

On the second day of full competition, Simen Hegstad Krueger led a Norwegian sweep in the men’s skiathlon after recovering from an early fall and breaking a pole.

“It is an indescribable feeling,” Krueger said. “It is an amazing day but it started in the worst way with the fall after the first 100 meters and a broken pole.

“I was completely last in the group so I had to start the race again and switch focus to catch up with the guys. When I did it I was, ‘OK, take one lap, two laps, three laps and just get into it again, and try to do it on the final lap’.”

And there was drama in the luge when reigning champion and hot favorite Felix Loch fluffed his final run to finish out of the medals and hand victory to Austria’s David Gleirscher.

In the slopestyle, Canada’s Mark McMorris staked an early claim for the most inspirational story of the Games after taking bronze — just 11 months after a near-fatal crash.

In a snowboarding accident last year, McMorris broke 17 bones and suffered a collapsed lung and ruptured spleen, leaving him fighting for his life.

“I don’t want to think too much about the past today, but I appreciate the fact I’m here on my snowboard,” he smiled.