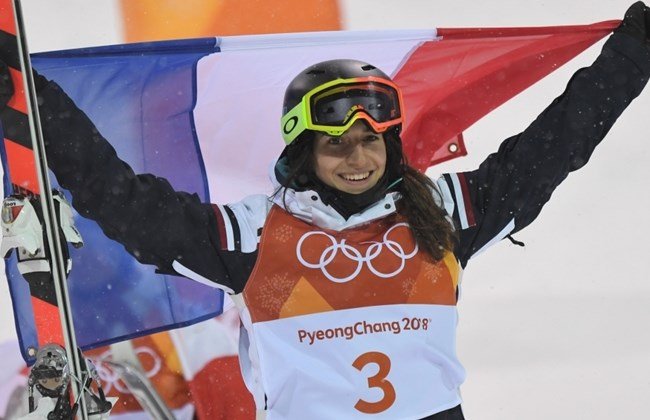 Laffont scored 78.65 in the third final to edge out Sochi gold medalist Dufour-Lapointe by 0.09 points.

Canada’s Andi Naude had the chance to claim glory on the final run but slid off the piste and did not finish.

It was a tight competition in brutally difficult conditions, with a blizzard blowing up the mogul piste.

Dufour-Lapointe set high scores in all three finals, including the highest score of the day in the first final of 79.50.

But as the conditions deteriorated, it was the 19-year-old Laffont who showed the greatest staying power to come out on top.

“It wasn’t like I had dreamed it. It was much harder than in my dreams,” Laffont said shortly after her podium presentation.

Dufour-Lapointe, a winner four years ago in Sochi at 19, said that this silver medal was harder-earned than her Olympic gold.

“After everything these past four years, this one means so much,” said the smiling Canadian.

“I am so proud of my performance out there. I was so determined to lay down a good performance and I have done that.”

Dufour-Lapointe’s sister Chloe, who sneaked into the final with an eighth place finish in the second round of qualifying, failed to progress.

The Sochi silver medalist finished 17th and was in tears.

“It is not easy to express the emotions,” she told reporters. “I am looking deep down inside to search for my emotions tonight.”

Laffont’s gold is the first medal for France at the Games.

Scotland fights back to beat France 32-26