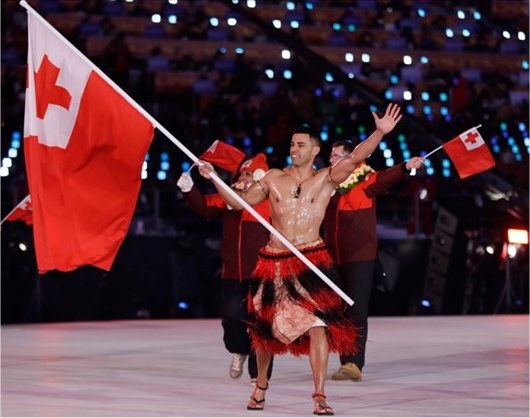 The 34-year-old beefcake caused a stir at the 2016 Rio Games when he oiled himself up and went topless as Tonga’s flag-bearer.

With the Pyeongchang Olympics threatening to be one of the coldest Games on record, Taufatofua had said he would be keeping his clothes on for the gala opening after swapping taekwondo for a pair of skis.

But lo and behold, once more he strode into the arena glistening with oil and bare-chested, wearing just a traditional male ta’ovala skirt, his muscles rippling as he waved Tonga’s flag around like a spear.

A self-proclaimed beach bum, Taufatofua became an instant online hit in Rio, racking up 45 million mentions on Twitter and later leading to appearances on international talk shows and other lucrative opportunities.

The naked Tongan’s brave cameo at Friday’s opening ceremony, where the two Koreas marched together in a symbol of what organisers are calling the “Peace Games”, is likely to boost his celebrity still further.

If nothing else, Taufatofua, who used to strap planks of wood to his feet to recreate the rigours of cross-country skiing in sweltering Australia, will have put the South Pacific island of Tonga on the map at the Winter Games.

Bid to find a Valentine for Romeo, world’s ‘loneliest frog’