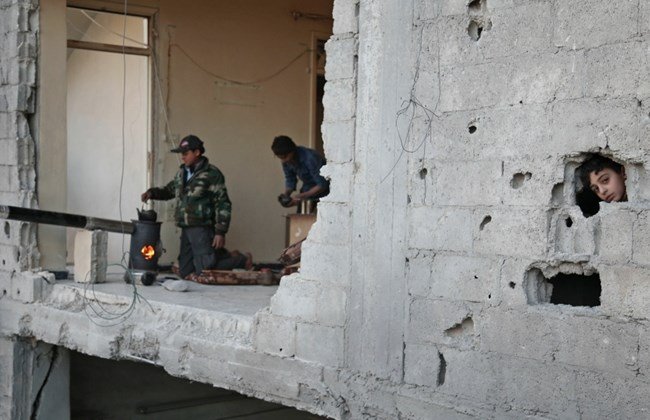 The United Nations called Tuesday for an immediate humanitarian ceasefire in Syria of at least one month as heavy air strikes were reported to have killed at least 30 people in rebel-held areas near Damascus and in the northwest.

Separately, U.N. war crimes experts said in Geneva that they were investigating multiple reports of bombs allegedly containing banned chlorine being used against civilians in the rebel-held towns of Saraqeb in the northwestern province of Idlib and Douma in Eastern Ghouta near Damascus.

In a statement, Paulo Pinheiro, head of the International Commission of Inquiry on Syria, said an ongoing Syrian government siege of Eastern Ghouta “involve[s] the international crimes of indiscriminate bombardment and deliberate starvation of the civilian population”.

Reports of air strikes hitting at least three hospitals in the past 48 hours “make a mockery of so-called “de-escalation zones”, Pinheiro said, referring to a Russian-led truce deal for rebel-held territory that has failed to stop fighting there.

The latest air strikes killed 25 people in the Eastern Ghouta suburbs of Damascus, a day after bombardments of the same pocket killed 30 people, according to the Syrian Observatory for Human Rights. Air strikes in rebel-held Idlib killed six.

U.N. envoys called for a cessation of hostilities to enable humanitarian aid deliveries, and the evacuation of the sick and wounded, listing seven areas of concern including northern Syria’s Kurdish-led Afrin region being targeted by a Turkish offensive.

Syrian President Bashar Assad, helped by Iran-backed militias and the Russian air force, is pursuing military campaigns against insurgents in the last major redoubts of territory held by his opponents in western Syria.

There were air strikes on towns across the Eastern Ghouta, including Douma where an entire building was brought down, a local witness said. In Idlib, where government forces and their allies are also on the offensive, at least five people were killed in the village of Tarmala, the Observatory said.

“Today there is no safe area at all. This is a key point people should know: there is no safe space,” Siraj Mahmoud, the head of the Civil Defense rescue service in opposition-held rural Damascus, told Reuters.

“Right now we have people under rubble, the targeting is ongoing, warplanes on residential neighborhoods,” he said.

In a statement, the U.N. representatives noted that humanitarian needs were rising in Eastern Ghouta, where people had not received inter-agency assistance since late November.

“Meanwhile, fighting and retaliatory shelling from all parties are impacting civilians in this region and Damascus, causing scores of deaths and injuries,” their statement said, released before the latest casualty tolls emerged Tuesday.

“In Idlib, the military operations resulted in increased casualties and movement of civilians to safer areas. Some of them have been forced to move several times to escape fighting,” they said, noting that two pro-government villages in Idlib also continued to be besieged by rebels.

Syria’s protracted civil war, which spiraled out of street protests against Assad’s rule in 2011, will soon enter its eighth year, having killed hundreds of thousands of people and forced millions to leave the country as refugees.

Neighboring Turkey’s offensive in Afrin against the Kurdish YPG militia, which began last month, has further complicated the multi-sided conflict.

The YPG has been an important U.S. ally in the war against Daesh (ISIS) militants, but Ankara sees it as an extension of the Kurdistan Workers Party (PKK), which is listed as a terrorist group by Turkey, the European Union and Washington.

Turkish President Recep Tayyip Erdogan ramped up his verbal assault on the U.S. role in Syria Tuesday, saying U.S. forces should leave Manbij, a Syrian city held by YPG-allied forces with support from the U.S.-led coalition.

He said the United States was working against the interests of Turkey, Iran and maybe Russia in northern Syria.

“If the United States says they are sending 5,000 trucks and 2,000 cargo planes of weapons for the fight against Daesh, we don’t believe this,” Erdogan told members of his AK Party in parliament.

“It means you have calculations against Turkey and Iran, and maybe Russia,” he said, repeating a call for U.S. troops to withdraw from Manbij.

In agreement with Iran and Russia, the Turkish military is setting up observation posts in parts of Idlib and Aleppo province. But tensions have flared as Turkish forces moved to set up one such observation position south of Aleppo.

The Turkish military said a rocket and mortar attack by militants killed one Turkish soldier while the observation post was being set up Monday.

It was the second attack in a week on Turkish soldiers trying to establish the position near the front line between rebels and pro-Syrian government forces.

In an apparent warning to Ankara, a commander in the military alliance supporting Assad said the Syrian army had deployed new air defenses and anti-aircraft missiles to front lines with rebels in the Aleppo and Idlib areas.

“They cover the air space of the Syrian north,” the commander told Reuters. That would include the Afrin area where Turkish warplanes have been supporting the ground offensive by the Turkish army and allied Free Syrian Army factions.

Turkey, which supported rebel fighters trying to overthrow Assad, has worked with Assad’s main international backers Russia and Iran in recent months to try to wind down the conflict in Syria. But all three countries remain deeply involved in the fighting, and stark divisions persist.