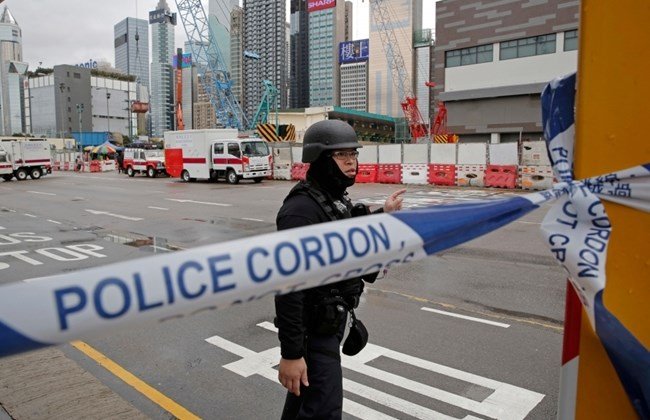 A second wartime bomb was discovered at a construction site in the heart of Hong Kong within a week, prompting thousands of people to evacuate Wednesday and stores to shutter.

Police sealed off parts of the busy Wan Chai district and ferry services crossing the Victoria Harbor were suspended as experts worked to unearth the explosive, an operation that would likely continue overnight.

The bomb was found at the same construction site along the harbor front as a 450-kilogram explosive that was successfully defused Saturday.

Over 4,000 people had been evacuated by Wednesday evening including hotel customers, residents, workers from the surrounding office towers and students from over 40 schools at a track and field event, Apple Daily reported.

Many restaurants and shops in the area teeming with office workers on a typical afternoon were also closed, according to an AFP reporter at the scene.

Both bombs were of the same American-made model that had been dropped on Hong Kong during the Second World War but the newly discovered one was in an unstable state, local media reported citing the police.

“The bomb is in a dangerous condition. The fuse mechanism is severely damaged and the bomb’s position is making it difficult for our equipment to gain optimum access,” the South China Morning Post cited bomb disposal officer Alick McWhirter as saying.

Unexploded wartime bombs or grenades are frequently found by hikers or construction workers in the southern Chinese city, which was the scene of fierce fighting between Japanese and British allied forces in 1941 and was also bombed from the air during sorties.

In 2014 police defused a wartime bomb weighing nearly one ton, the largest yet found in the city.

Teen killed in Turkey by rockets from Syria