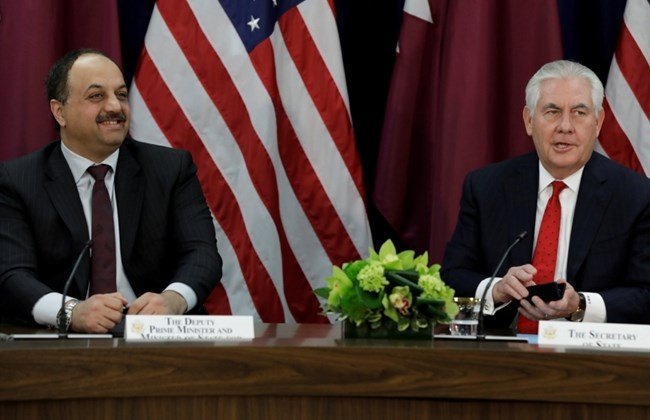 The United States and Qatar Tuesday inked a deal to resolve a years-old quarrel over alleged airline subsidies, as Qatar’s government works to defuse tensions with the Trump administration.

A formal announcement came Tuesday, as Secretary of State Rex Tillerson and Defense Secretary Jim Mattis hosted the inaugural round of the U.S.-Qatar strategic dialogue. Agreements, on security and counter-terrorism cooperation and combatting human trafficking, were also signed.

“Qatar is a strong partner and long-time friend of the United States,” Tillerson said, welcoming the agreements. Tuesday’s meeting follows harsh criticism of Qatar from President Donald Trump. He denounced the country last year for allegedly funding terrorism amid a row between the country and other members of the Gulf Cooperation Council, who have imposed a land, sea and air blockade on it.

Tillerson and Mattis said the U.S. remains deeply concerned about the situation as it nears its eight-month mark, including hostile “rhetoric and propaganda” being employed. They called on all parties to the dispute to renew efforts to end it.

Qatar is home to a major U.S. military base that is key to the fight against Daesh (ISIS) in Iraq and Syria and Mattis said that “a united GCC bolsters our effectiveness on many fronts.”

The aviation agreement will see state-owned Qatar Airways agree voluntarily to open up its accounting books. U.S. airlines say the company receives billions of dollars in government payments that leave them at a competitive disadvantage. Qatar also made a loose commitment that the flag carrier won’t launch flights to the United States from Europe or other non-Qatari cities, creating yet more competition for the U.S. airlines.

Both sides of the dispute can claim the agreement as a victory – for very different reasons.

The U.S. airline industry can claim the increased transparency will create a powerful disincentive to unfair subsidies, as Qatar will no longer be able to mask such payments through creative accounting. The three major U.S. carriers – Delta Air Lines, American Airlines and United Airlines – have spent huge sums over the last three years pressing the Obama administration and Trump administration for tough action. They’re eager to show a win.

Yet for Qatar, the agreement averts the more serious step U.S. airlines wanted: re-opening the so-called open-skies treaties that could lead to less favorable conditions for Persian Gulf airlines. And, it means that Qatar can also show it’s cooperating closely and productively with U.S. regulators.

That could help the tiny gas-rich kingdom draw a contrast with the United Arab Emirates, whose two airlines are also accused of improper subsidies but have yet to reach an agreement with Washington.

“Everybody gets to claim victory in this,” Helane Becker said, an airline analyst for Cowen and Co.

Indeed, even before the announcement, American, the world’s biggest airline by passenger traffic, praised the deal as a way to “thoughtfully address” Qatari subsidies. And United CEO Oscar Munoz applauded the agreement while thanking Trump’s administration for “effectively representing the interests of the American aviation industry.”

Though on the same side of the airline dispute, Qatar and the UAE oppose each other in a bitter, unrelated standoff. Last year, the UAE, Saudi Arabia and other Gulf nations blockaded Qatar after accusing it of supporting extremism and fomenting dissent throughout the region. Qatar hopes to change that narrative by enhancing counterterrorism cooperation and allowing greater U.S. visibility into its finances and banking practices.

In an eight-paragraph document laying out “understandings” between Qatar and the U.S., the Gulf nation committed within one year to releasing audited financial statements for Qatar Airlines “in accordance with internationally-recognized accounting standards.” Within two years, Qatar Airways is to disclose any transactions with other state-owned entities, such as caterers or other companies that support airline operations, closing what the U.S. airlines have claimed is a backdoor used by Gulf nations to hide illicit subsidies.

A side-letter to the agreement stated that Qatar’s civilian aviation authority is unaware of any plans by Qatar Airlines to start so-called “Fifth Freedoms” flights – routes from third countries to the United States. Under the scenario U.S. airlines fear, Qatar Airways could offer flights from its Doha hub to, say, Paris or London, stop to pick up more passengers, then fly on to New York.

The side-letter only says there are no current plans to operate such service. That’s short of a binding guarantee. There’s also no commitment Qatar Airways won’t expand its offering of Qatar-U.S. flights.

“This appears to be the administration essentially throwing a meatless bone to the three U.S. carriers to put an end to their rants against the Gulf carriers,” John Byerly said, who was the chief open skies negotiator in the Obama administration and has also consulted for Emirates Airline and UPS.

The two UAE airlines – Dubai-based Emirates and Abu Dhabi-based Etihad Airways – aren’t a party to the U.S.-Qatar agreement. Emirates Airline currently offers “Fifth Freedom” flights in which passengers can fly from New York-area airports to Milan, Italy or Athens without ever setting foot in the UAE.

All three Gulf airlines have long denied receiving unfair government subsidies. There was no immediate reaction from either Emirates or Etihad.