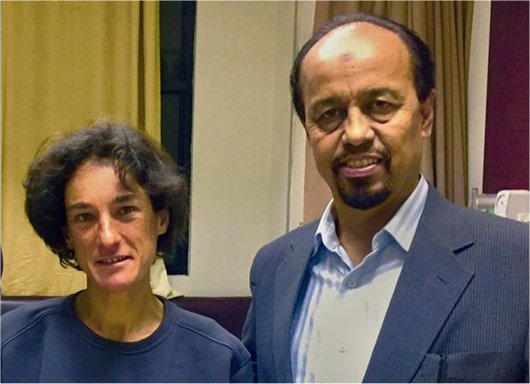 A mountain climber who was rescued from a Himalayan peak where her climbing partner is presumed to have died has returned home to France, a representative of a Pakistani mountaineering group said Tuesday.

Karrar Haidri of the Alpine Club of Pakistan said Elisabeth Revol left Pakistan before dawn. Revol praised everyone who participated in rescuing her from Nanga Parbat, said Haidri, who visited her at the Islamabad where she was treated.

Suffering from frostbite and exhaustion, Revol was rescued Sunday by Polish climbers who were on a separate expedition and braved high winds and low nighttime temperatures to bring her down from Nanga Parba, the world’s ninth-highest peak at 8,126 meters.

In an account published Tuesday, the climbers, Denis Urubko and Adam Bielecki, described the difficult decision to call off trying to save Revol’s partner, Tomasz Mackiewicz of Poland, after Revol reported the poor condition he was in when she last saw him.

Revol said Mackiewicz had frostbitten hands and legs and face, no sense of time or space, was snow blind, and unable to move unassisted.

The two mountaineers got stuck Thursday while climbing Nanga Parbat, Pakistan began a rescue operation when the weather cooperated Saturday. The Polish climbers thanked the Pakistani helicopter pilots who transported them.

Their expedition to attempt the first winter ascent of K2, the world’s second-highest mountain, plans to resume.

63M women, girls missing due to India’s preference for boys