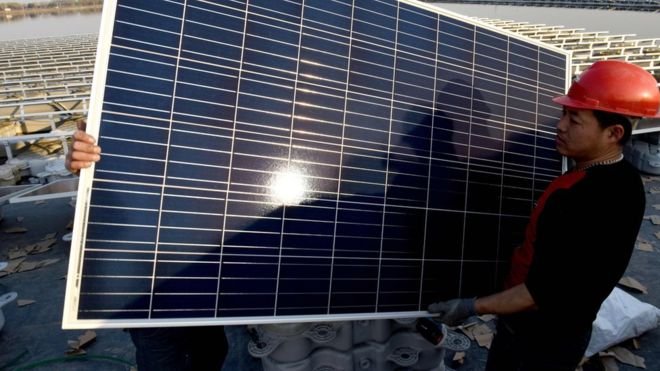 The US has approved controversial tariffs on imported washing machines and solar panels.

The move is in line with President Donald Trump’s “America First” trade policy, which aims to protect local manufacturers from foreign competition.

But China and South Korea, whose manufacturers will be most heavily affected, criticised the move.

Mr Trump has talked about taking the action ever since coming to office. In his inauguration speech a year ago he promised to protect US borders from other countries “making our products, stealing our companies and destroying our jobs”.

The actions are being seen as the president’s most significant trade moves since his decision to pull the US out of the Trans-Pacific Partnership deal (TPP) and renegotiate the North American Free Trade Agreement (Nafta).

The tougher policy was approved by President Trump after the US International Trade Commission found local manufacturers were being hurt by cheaper imports.

The tariffs set on solar panels were lower than domestic US producers had hoped for, but the duties on washing machines and parts were steeper than expected – adding as much as 50% in some cases, according to US documents.

The first 1.2 million imported large residential washing machines in the first year will have a 20% tariff imposed on them, while there will be a 50% tariff on machines above that number.

Meanwhile, the tariff increase on imported solar cells and modules in the first year will be 30%, falling to 15% by the fourth year, although 2.5 gigawatts (GW) of imported cells will be allowed in tariff-free annually.

US appliance maker Whirlpool, which for years has sought protection against cheaper imports from South Korea and Mexico, welcomed the move.

“This announcement caps nearly a decade of litigation and will result in new manufacturing jobs in Ohio, Kentucky, South Carolina and Tennessee,” chairman Jeff Fettig said in a statement.

Shares in Whirlpool rose 2.5% on the news, and it immediately announced it would employ 200 more people. Shares in US solar panel manufacturers also went up.

Environmentalists argue that making solar panels more expensive risks holding back the development of renewable energy in the country.

China and South Korea have reacted angrily to the news.

South Korea said it would complain to the World Trade Organization (WTO), calling the tariffs “excessive” and “regrettable”. Its manufacturers, including Samsung and LG, compete in the washing machine market with US firms such as Whirlpool.

Samsung called the tariffs “a tax on every consumer who wants to buy a washing machine”.

He warned that “together with other WTO members, China will resolutely defend its legitimate interests” adding that the plans “not only aroused the concern of many trading partners but was also strongly opposed by many local governments and downstream enterprises in the US”.