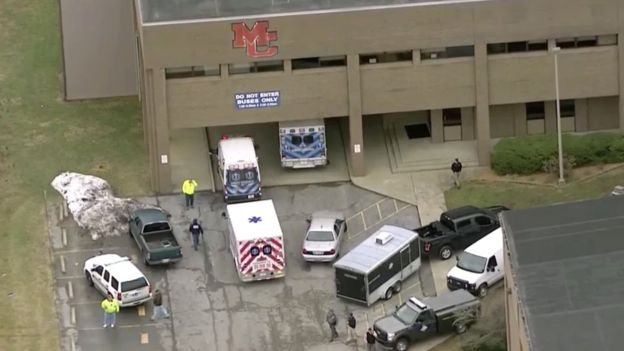 Two people have been killed and 17 injured in a high school shooting in the US state of Kentucky.

A 15-year-old girl died at the scene at Marshall County High School in the town of Benton and a 15-year-old boy died in hospital, said Kentucky’s governor.

The unidentified attacker was a 15-year-old male student, who was arrested and is in custody.

State police said he was detained about 15 minutes after opening fire at 08:00 local time on Tuesday.

The lone attacker was a student at the school who opened fire with a handgun in a common area before classes started, according to local media.

He will be charged with murder and attempted murder, said officials, who add that the FBI is assisting in the investigation.

“To walk in, the backpacks laying around, the phones laying around, going off, it’s indescribable,” said Marshall County Attorney Jeffery Edwards, reports the Louisville Courier-Journal.

“I’ve been doing this for 25 years. It’s not like anything I’ve experienced in my life.”

Mr Edwards told the newspaper that the shooter had appeared to open fire at random.

The state governor said the attacker was taken into custody in “a nonviolent apprehension”.

Five students were taken to the Vanderbilt University Medical Center in Nashville, Tennessee for treatment. One died there after suffering a gunshot to the head.

“There’s an uptick of these mass casualties across the country… and we can handle a huge load of patients,” said trauma surgeon Dr Richard Miller during a press conference.

Governor Matt Bevin called the attack a “tremendous tragedy” in a statement posted on Twitter.

“It is unbelievable that this would happen in a small, close-knit community like Marshall County,” he said.

“As there is still much unknown, I encourage people to love on each other at this time.

“Do not speculate, but come alongside each other in support and allow the facts to come out.”

#MarshallCounty High Shooting: “The KSP has been in this area recently teaching the faculty how to respond to an active shooter situation. The students and faculty did everything they were trained to do” -KSP Commissioner Rick Sanders

In Washington, Kentucky Senator Mitch McConnell took to the Senate floor to send “prayers of comfort and healing to students, faculty, and staff and everyone affected by this violence”.

Several nearby churches and schools are planning to hold vigils for the victims.

Classes at Marshall County High School have been cancelled for Wednesday.

The souls of Marshall County have been bruised and the fabric of the community has been torn, but the people of Benton, KY and the surrounding communities are strong…With faith in God and with reliance on friends and family, we will get through this dark day together…#WeAreKY

It is at least the second gun attack in an American school in as many days.

A 15-year-old girl was shot by a 16-year-old classmate in her high school cafeteria on Monday in the small Texas town of Italy.

The girl is recovering in hospital; her attacker fled but was later arrested.