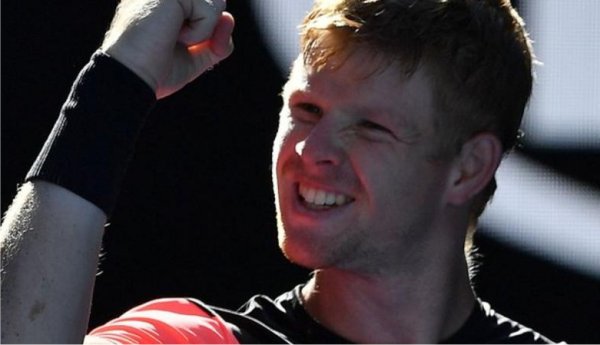 The world number 49 becomes only the sixth British man to reach the last four at a Grand Slam in the Open era.

He will play top seed Rafael Nadal or sixth seed Marin Cilic on Thursday for a place in the final.

“With these sort of things, you’re emotionally engaged and you don’t take it in. At the end of a hard match, I just tried to enjoy the moment.

“It’s my first match on this court and it was very special.”

Andy Murray, Greg Rusedski, John Lloyd, Roger Taylor and Tim Henman – who was watching from the front row on Rod Laver Arena – are the only other British men to have reached Grand Slam singles semi-finals since tennis turned professional in 1968.

Edmund has long looked the most likely to join that list, but few would have predicted it would happen at this year’s Australian Open.

Ranked 49th and without an ATP final to his name, let alone a title, logic suggested there were several more steps to make before becoming a major contender.

However, the 23-year-old Yorkshireman’s huge forehand is already one of the biggest shots in the game, and marked improvements on serve and return in the off-season appear to have fast-tracked him.

“It’s great,” added Edmund. “You don’t think of those things when you play but it’s something to be proud of.

“As a kid you’re growing up looking at your idols and when you’re here progressing in the best tournament in the world, it’s amazing.”

Dimitrov, 26, had won a much-anticipated match against Nick Kyrgios to reach the last eight, but his form had been patchy before then and he failed to impose himself on the powerful Edmund.

The Bulgarian dropped serve in the opening game with a loose backhand and, despite levelling at 3-3, it was a fair reflection of the play when Edmund hammered a forehand return to break again at 5-3.

The serve he had worked so hard on came to his rescue in seeing off three break-back points, and after 42 minutes the outsider was a set up.

A scrappy second set slipped away from Edmund at the start as Dimitrov raced into a 3-0 lead and held on, despite an edgy seventh game that included three double faults.

Dimitrov’s athleticism was on show with some brilliant defence early in the third set but the more experienced man was the one to crack.

A loose forehand offered up two break points and a seventh double fault of the day gifted Edmund the chance to serve out the set.

When Dimitrov hooked a wild forehand wide to drop serve midway through the fourth set there appeared no way back, but the tension took hold as Edmund handed it straight back with a poor service game.

Again there was an opening for the world number three to take charge, but once more it was Edmund who looked the calmer with victory in his sights.

He pressed for the break in game seven and then upped the pressure in game nine, opening with a hooked forehand winner followed by a backhand arrowed down the line.

A first break point slipped way, but Edmund got his racquet on a good serve to float back a return on the second, and a desperate Dimitrov slammed his forehand into the net.

With Swedish coach Fredrik Rosengren a bundle of nerves in the stands, the Briton was thankful for a Dimitrov error at 15-30 and followed up with an ace.

There was one final moment of drama on match point when Edmund was made to wait – before Hawkeye eventually confirmed that Dimitrov had sent the ball long.

“He’s played hard matches, especially against Nick Kyrgios, and I knew it was going to be tough,” said Edmund.

“I had a bit of a dip and I was playing quite poor tennis at times. But I held my nerve and prayed that last ball was out.”