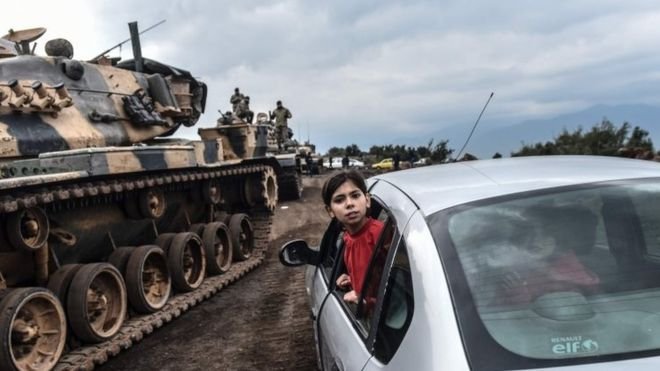 But the Kurdish YPG militia says it has repelled Turkish troops in Afrin.

Turkey’s operation, announced Saturday, risks increasing tensions with the US, which was supporting the YPG in the fight against Islamic State jihadists.

The YPG (Syrian Kurdish People’s Protection Units) is part of a US-backed alliance with a number of ethnic Arab militias called the Syrian Democratic Forces (SDF). The SDF has said it will have no choice but to defend itself if attacked.

Turkish troops, accompanied by pro-Turkey rebels from the Free Syrian Army, have already advanced some 5km (3 miles) into Syrian territory, state-run Anadolu news agency reported. No further details about the 30km security zone were given.

But a spokesperson for the YPG, Nouri Mahmoudi, said the group had managed to repel Turkish troops and they were “forced to retreat”.

Turkey’s military said it had hit 45 targets on Sunday, as part of its air and ground campaign dubbed “Olive Branch”.

It earlier said it had taken out 153 targets belonging to Kurdish militants, although it is unclear if this includes Sunday’s figures.

“Our jets took off and started bombing. And now, the ground operation is under way. Now we see how the YPG… are fleeing in Afrin,” he said. “We will chase them. God willing, we will complete this operation very quickly.”

He also warned that anyone protesting in Turkey over the operation would pay a “heavy price”. Police later stopped demonstrations in a number of Turkish cities, including Istanbul, and made several arrests.

There are reports of fatalities on both sides.

The YPG said at least four Turkish soldiers and 10 Syrian rebel fighters supporting them were killed in clashes on Sunday morning, but there has been no confirmation from Turkey

The Kurdish group also said eight civilians had been killed in an air strike on a chicken farm in the village of Jalbara on Sunday. This follows at least nine deaths in strikes on Saturday – six civilians and three fighters – though Ankara said they were all Kurdish militants.

Kurdish rockets meanwhile hit the Turkish border town of Kilis overnight, and there were reports of at least one fatality after three rockets were fired at another border town, Reyhanli, on Sunday.

The town’s mayor said a Syrian national had died, and another 32 were wounded, according to the NTV broadcaster.

Turkey’s military has been shelling the Afrin region since Thursday, a move which it said was in response to fire coming from the area.

With America’s backing of the YPG, Turkey’s risky offensive puts Ankara in direct confrontation with its Nato ally, the BBC’s Mark Lowen on the Turkish-Syrian border warns.

There is also a danger that the number of those killed in the Syrian war – estimated to be half a million – will rise again with the opening of this new front, he adds.

The YPG has been a key part of the battle against Islamic State in Syria, and has been given support by the US.

Turkey, however, believes the group has links to the banned PKK, and has for several months been threatening to clear Kurdish fighters from Afrin and another city, Manbij, which lies 100km away.

Turkey was angered when the US announced it would help the SDF alliance build a new “border security force” to prevent the return of IS. President Erdogan called the border force a “terror army”.

The YPG and SDF deny any terrorist links – a claim backed by the US government.

Many Western powers are urging restraint, with the US and France both saying the focus should be on the fight against IS.

French Foreign Minister Jean-Yves Le Drian says he will call for an emergency meeting at the UN Security Council over the issue.

The US is urging Turkey “to exercise restraint and ensure that its military operations remain limited in scope and duration and scrupulous to avoid civilian casualties,” the state department said on Sunday.

Secretary of State Rex Tillerson expressed his concern in calls to his Turkish and Russian counterparts on Saturday, it added.

Syrian President Bashar al-Assad condemned the incursion on Sunday, saying “the brutal Turkish aggression” on Afrin was part of Ankara’s policy of “support for terrorism” in Syria.

Russia – a key ally of President Assad – also said it was concerned by the news, and withdrew some of its troops based in the area.

Moscow will take up the issue at the UN Security Council and demand Turkey halt its military operations, according to Russian senator Frants Klintsevich, who is the deputy chairman of the defence and security committee.