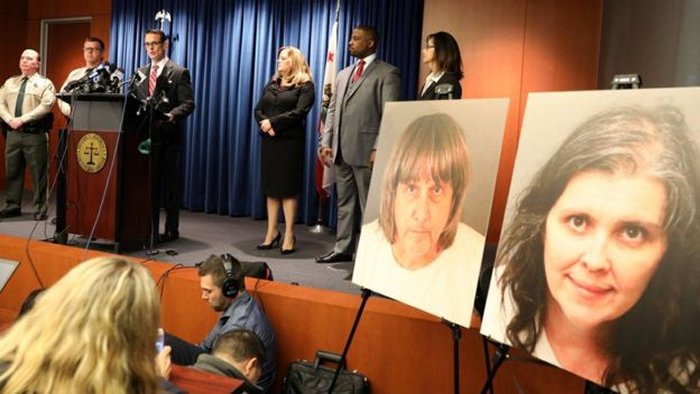 The parents accused of holding their 13 children in shackles at a California home have pleaded not guilty.

They were arrested after their daughter escaped from their home where police found some of her siblings chained to their beds and severely malnourished.

The couple appeared in court hours after prosecutors detailed the horrific abuse allegations against them.

Riverside County District Attorney Mike Hestrin said the couple had allegedly punished their children by tying them up – first using ropes and later chaining them to their beds with padlocks.

He said the alleged punishments would last weeks or months, and intensified over time.

Prosecutors said circumstantial evidence showed the children were not released from their chains to go to the toilet.

The children, who are aged between two and 29 , have been treated in hospital since being freed on Monday.

The teenager who escaped and alerted police to the house where her siblings were held captive had been hatching a plan to leave for two years, Mr Hestrin said.

Mr Hestrin detailed some of the gruesome allegations against the parents at a news conference on Thursday.

The shocking claims include:

The 2-year-old was of normal weight but the other children were severely malnourished, authorities said.

Several of the children have cognitive impairment and “neuropathy, which is nerve damage, as a result of this extreme and prolonged physical abuse,” Mr Hestrin said.

Though little is known about their education, some of the children were able to read and write. Mr Turpin also registered a private school in their California home, known as Sandcastle Day School.

Police have obtained hundreds of journals that the children were allowed to write in and are looking through them for evidence.

Before moving to California, the family lived in Texas.

At one point, the parents allegedly lived in a different house from their children and would drop off food from time to time, officials said.

If found guilty of the dozens of charges against them, the couple face 94 years to life in prison, Mr Hestrin added.

Mr Turpin also faces one count of “lewd act on a child under 14 years of age”.

The 13 children were found in an emaciated state in their filthy, foul-smelling house, police revealed earlier. Officers had at first thought all the children were minors but later realised some were frail and malnourished adults, they said.

Mr Hestrin said that when officers arrived, three of the couple’s children were chained to their beds.

The charges against David and Louise Turpin: