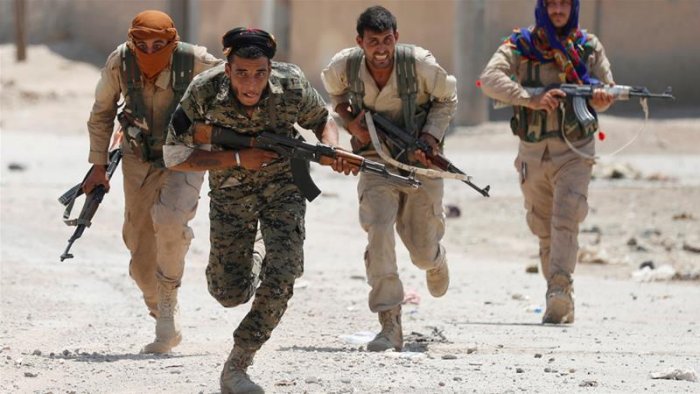 Syria threatened on Thursday to “destroy” any Turkish warplanes that fly into its territory as Ankara prepares to launch a cross-border military operation to wipe out Kurdish fighters it calls “terrorists”.

Turkish officials have repeatedly vowed to attack the Syrian-Kurd militia known as the YPG at any moment in the Afrin region in northern Syria, near the border with Turkey.

The move comes after the United States announced this week it would train the YPG-dominated Syrian Democratic Forces (SDF) to be part of a 30,000-strong “border force” – a statement US Secretary of State Rex Tillerson said on Thursday was “misportrayed”.

Syria’s government warned Turkey it would shoot down Turkish fighter jets and bombers that flew into its airspace.

“We warn that the Syrian Air Force is ready to destroy Turkish air targets in the skies of Syria,” Deputy Foreign Minister Faisal Mekdad was quoted as saying by the official SANA news agency.

“We warn the Turkish leaders that if they start fighting in the region of Afrin, it will be seen as an aggression by the Turkish army against the sovereignty of Syria.”

Mekdad added a military incursion into Afrin would be “no picnic” for Turkey.

The YPG has been a favoured military force on the ground in Syria for the United States, which has trained, armed, and supplied the militia as it battled Islamic State of Iraq and the Levant (ISIL).

In Afrin, residents took to the streets to protest Turkey’s threats, according to photos published by the Kurdish news agency Hawar.

They waved flags of the YPG and also banners of Abdullah Ocalan, the imprisoned leader of the outlawed Kurdistan Workers’ Party, or PKK. Turkey says the PKK and YPG work together.

“Turkey is subject to attacks every day from Afrin. It is our right to self-defence in line with international law to take measures against a terror group surrounding us on three sides,” said Cavusoglu.

He added: “We have informed them [US] we will be intervening in Afrin and we will take action against the threats towards us wherever they come from on the eastern side of the Euphrates, in Manbij or elsewhere.”