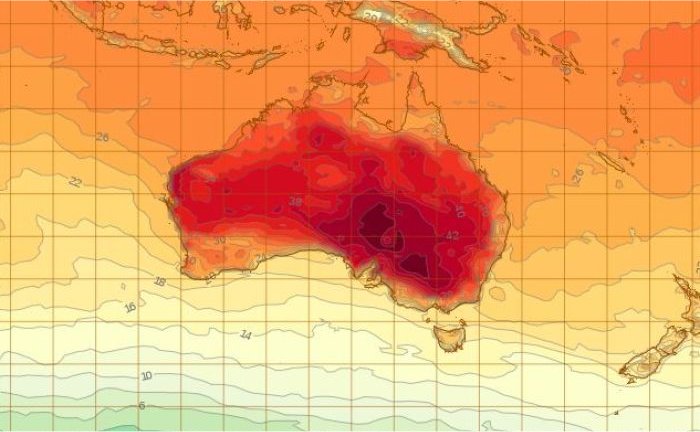 Very hot and dry conditions have been forecast across the country today and over the weekend, fuelling warnings of extreme fire danger in some states.

Total fire bans have been declared in parts of South Australia, Victoria and New South Wales, with a severe heatwave forecast by the Bureau of Meteorology (BoM).

South Australia can expect some relief starting from tomorrow, but conditions will deteriorate in New South Wales over the weekend.

Sydney is set to be smacked with another heatwave just two weeks after Penrith recorded its highest temperature by a weather station in 79 years.

A severe fire danger rating has been issued for parts of NSW, including the Greater Sydney, Greater Hunter, Central Ranges, North Western and Northern Slopes regions.

About 20 fires are burning across the state, 10 of which are uncontained. There is no threat to lives or properties at the moment.

“We are likely to see high temperatures, hot dry conditions for most of today and right across the weekend,” he said.

“So over the next few days it’s really important that with our firefighters standing by and prepared, that residents are also doing what they can by knowing the fire danger rating and having a bushfire survival plan made and discussed ahead of time.”

The state is expected to swelter today with some parts of the state, the Wimmera and Mallee, likely to have the barometer soar in the mid 40s.

In Melbourne, Avalon Airport, Geelong Racecourse and Laverton had passed 40C by 11.40am.

A number of fires are also burning around the state, but currently no communities are being threatened.

The Bureau of Meteorology’s senior forecaster Stephen King said there will be a sudden drop in temperature in the southern parts of the state by about 4:00pm or 5:00pm.

“Probably getting up to 30 degrees pretty early in the morning, probably by about 9:00am and then soaring right up to 40 degrees soon after lunch, but the good news is there is a change on the way,” he said.

“Southern parts of Victoria will see quite a bit of relief tonight, so we’ll be back down to much more comfortable sleeping weather tonight with 19 degrees in Melbourne.”

That’s expected to continue through the weekend with temperatures tipped in the low 30s.

However, northern parts of the state — especially in Mildura — are still forecast to soar past 40C.

“Today the key message has got to be about heat and fire and water safety. It’s a safety day. And it’s up to people just to plan that into their day,” he said.

“And I think the last one that people need to think about is what would happen if you didn’t have power?

“You know, on hot days like this, there’s a chance that power will drop out somewhere, or it will be caused by a fire or whatever, so it is a day that you’ve got to think about what it means for you and your family, where you’ll be and what you’re doing.”

Extreme temperatures will also push players at the Australian Open to the limit, with a court temperature reading of 69C recorded during the match between Novak Djokovic and Gael Monfils.

Djokovic described it as “brutal”, while Monfils said it was risky to play under such conditions.

But Roger Federer’s message differed from some of his cohorts, telling reporters that he “can’t complain” since you know when you come to Australia that the heat can “sometimes be problematic”.

South Australia is also in for another day of extreme and severe fire danger ratings with temperatures again expected to peak above 40C after reaching a top of 41C yesterday and 38C on Wednesday.

But there will be some relief this weekend, as temperatures begin to drop back to the mid 30s.

State Emergency Service volunteers will be handing out water at Adelaide Airport as well as providing advice to international visitors to help them cope with extreme temperatures.

The heat has forced changes to the Tour Down Under, with stage three on Thursday shortened and today’s stage four starting an hour earlier.

A community challenge that attracts thousands of amateur cyclists scheduled for today was also cancelled, but it is believed hundreds of riders still cycled the route.

Meanwhile, Monash University’s Dr Roger Dargaville, who is an expert on energy systems, has suggested SA will be getting pretty close to hitting peak demand on their power grid today.

“They have 3,000 megawatts of total capacity and they’re heading for 2.7 today, so again getting pretty close,” he said.

But a number of measures have been implemented to prevent the statewide blackout experienced in 2016.

“[Measures] such as a very large 100 megawatt battery, 250 megawatts of open-cycle gas turbines — so adding extra capacity into the grid to supply, extra electricity when demand peaks is one of the ways, and otherwise providing additional emergency reserves, making sure there is extra power available when the demand goes high is a way the system can be secured,” he said.

Treasurer Tom Koutsantonis said the temporary generators were ready, but the state should have enough supply without them.

“Victoria I understand is about to load shed industry. So they’re not coping with the power supply,” he said.

“They are a coal-dependent state and they are having to take industry offline to support their households. In South Australia we’re not having to do that today.”

Canberrans are also bracing for five days of hot weather, with temperatures expected to rise above 35C.

BOM has forecast temperatures to hit 38C today, tomorrow and on Monday in the ACT with Sunday slightly cooler at a top of 37C.

Parts of Tasmania are expected to hit 38C today, which is the state’s highest temperature in more than two years.

The bureau expects the towns of St Helens, Fingal and St Marys to reach 36C and surrounding areas to be another 2C hotter.

BOM forecaster Rachel McInerney said it has not been that warm since December 2015.

“A total fire ban has been declared for most of Tasmania, with the fire danger ranging from very high to severe. Authorities are also preparing for the threat of dry lightning strikes.”