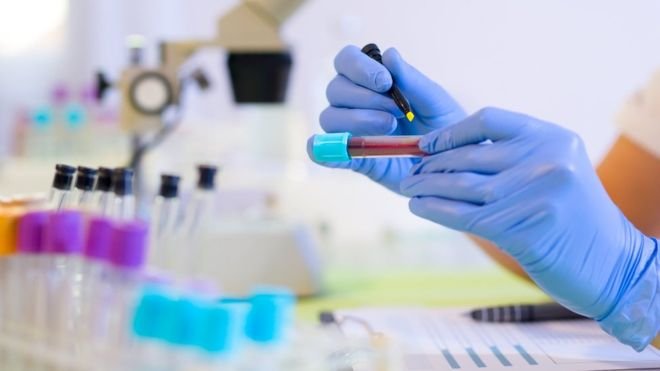 Scientists have taken a step towards one of the biggest goals in medicine – a universal blood test for cancer.

A team at Johns Hopkins University has trialled a method that detects eight common forms of the disease.

Their vision is an annual test designed to catch cancer early and save lives. UK experts said it was “enormously exciting”.

Tumours release tiny traces of their mutated DNA and proteins they make into the bloodstream.

The Cancer Seek test looks for mutations in 16 genes that regularly arise in cancer and eight proteins that are often released.

It was trialled on 1,005 patients with cancers in the ovary, liver, stomach, pancreas, oesophagus, colon, lung or breast that had not yet spread to other tissues.

Overall, the test found 70% of the cancers.

Dr Cristian Tomasetti, from Johns Hopkins University School of Medicine said: “This field of early detection is critical, and the results are very exciting.

“I think this can have an enormous impact on cancer mortality.”

The earlier a cancer is found, the greater the chance of being able to treat it.

Five of the eight cancers investigated have no screening programmes for early detection.

Pancreatic cancer has so few symptoms and is detected so late that four in five patients die in the year they are diagnosed.

Finding tumours when they could still be surgically removed would be “a night and day difference” for survival, said Dr Tomasetti.

Cancer Seek is now being trialled in people who have not been diagnosed with cancer.

This will be the real test of its usefulness.

The hope is it can complement other screening tools such as mammograms for breast cancer and colonoscopies for colorectal cancer.

Dr Tomasetti told the BBC: “We envision a blood test we could use once a year.”

The Cancer Seek test, reported in the journal Science, is novel because it hunts for both the mutated DNA and the proteins.

Increasing the number of mutations and proteins being analysed would allow it to test for a wider range of cancers.

Dr Gert Attard, team leader in the Centre for Evolution and Cancer at the Institute of Cancer Research, London, and consultant medical oncologist at the Royal Marsden NHS Foundation Trust, told the BBC: “This is of massive potential.

“I’m enormously excited. This is the Holy Grail – a blood test to diagnose cancer without all the other procedures like scans or colonoscopy.”

He said “we’re very close” to using blood tests to screen for cancer as “we have the technology”.

But he cautioned there was still uncertainty about what to do when a cancer was diagnosed.

In some cases, the treatment may be worse than living with a cancer that is not immediately life-threatening.

Men can already have slow growing prostate cancers closely monitored rather than treated.

“When we detect cancer in a different way, we can’t take for granted that everyone will need treatment,” Dr Attard said.

The cost of Cancer Seek is less than $500 per patient, which is around the same price as a colonoscopy.

Second baby hit by salmonella from Lactalis milk in Spain