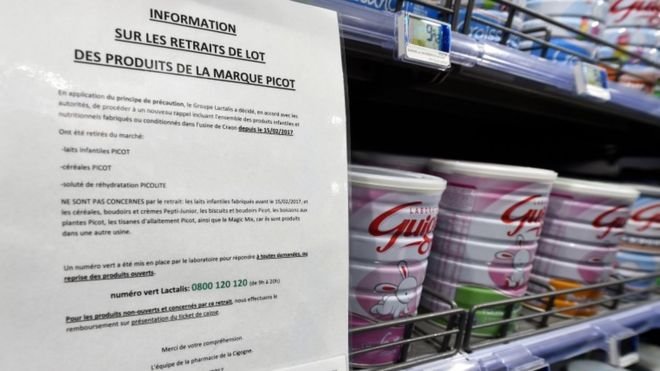 More than 12 million boxes of powdered baby milk have now been recalled in 83 countries in a salmonella scandal involving French company Lactalis.

The dairy firm’s CEO, Emmanuel Besnier, confirmed the extent of the contamination risk to French media.

The products have been subject to a recall since December, after salmonella bacteria was discovered at a factory.

Lawsuits have been filed by parents who say their children became unwell after drinking the formula.

A spokesman told the BBC that all the countries affected had been informed, in Europe, Asia, Latin America and Africa. The UK, US and Australia were not affected, he added.

The Lactalis group is one of the world’s largest producers of dairy products, with annual sales of €17bn ($21bn), It has 246 production sites in 47 countries and employs 15,000 people in France alone.

Recalls have now been issued by the firm three times, and cover its Picot, Milumel and Taranis brands.

Salmonella can cause severe diarrhoea, stomach cramps, vomiting, and severe dehydration. It can be life-threatening, especially in young children.

So far 35 cases have been reported in France and another one has been confirmed in Spain.

Another possible case is being investigated in Greece, French authorities said on Friday.

In an exclusive interview in French newspaper Journal du Dimanche,, the Lactalis chief executive denied the firm had attempted to hide the outbreak at the plant.

“There are complaints and there will be an investigation with which we will fully collaborate,” said Mr Besnier.

He also promised the company would compensate any families affected.

The company has said they believe the contamination was caused by renovation work at their Celia factory in Craon, in north-west France.

France’s agriculture minister said products from the factory will be banned indefinitely whilst the investigation is still ongoing.

The French government has warned the company it must expect penalties over its handling of the affair.

They also threatened to impose sanctions against retailers on Thursday, after it emerged that several major supermarket chains had continued to sell products that could have been contaminated.