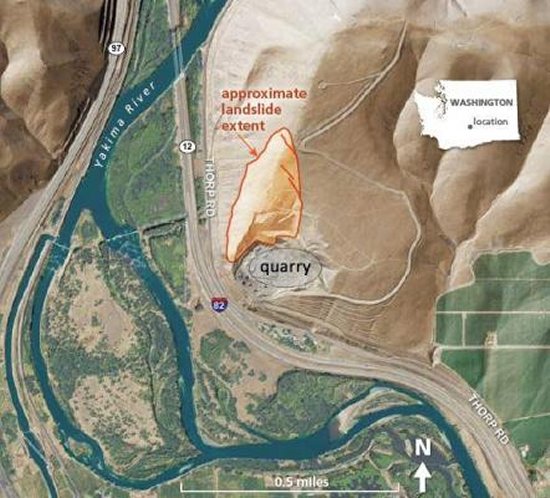 A landslide in Washington state could get worse and damage nearby homes, causing dozens of people to evacuate the area, officials said Sunday.

Geologists with the Washington Department of Natural Resources have been monitoring the landslide at Rattlesnake Ridge, located near the center of the state, since October. Millions of cubic feet of land have moved since then and now geologists believe a major “event” could take place sometime between Jan. 14 and Feb. 28.

“What’s going to happen and when? The honest answer is no one knows for certain. There are a number of possibilities,” the Yakima Valley Office of Emergency Management said in a Facebook post. “The most likely scenario is that the landslide will continue to slowly move to the south, where the landslide mass will fall into the quarry pit and accumulate.”

The agency listed other “less likely” possibilities that include the landslide moving beyond the quarry and potentially damaging homes to the south and reaching the Yakima River.

“It’s been increasing in acceleration since we first started monitoring it. There is extensive monitoring on this site. And we’ve been watching it very closely since that time,” said Norman.

The Seattle Times reported that 63 people who live near the base of Rattlesnake Ridge — most of them fruit industry workers — have already been moved out of the area to motels out of the danger zone.

“Everyone is scared, terrified,” one resident said. “They’re scared of the mountain.”