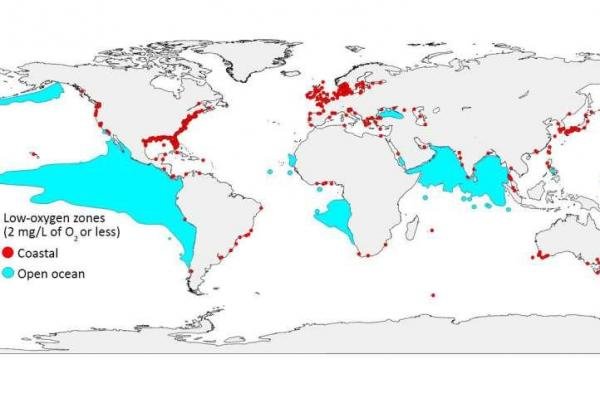 Regions of low-oxygen and no-oxgyen in Earth’s oceans are growing in size and number, according to a new study — the most comprehensive survey of ocean oxygen levels to date.

The latest data shows expanses of no-oxygen in the open ocean have increased four-fold over the last half-century. Since 1950, low-oxygen sites among estuaries, bays and other coastal water bodies have increased 10-fold.

The vast majority of ecosystems in the ocean rely on sufficient levels of oxygen. As oxygen levels continue to decrease, ecosystems and food chains are likely to be disrupted in a variety of ways.

“The decline in ocean oxygen ranks among the most serious effects of human activities on the Earth’s environment.” Denise Breitburg, marine ecologist with the Smithsonian Environmental Research Center, said in a news release.

Oxygen level measurements were collected by scientists participating in the Global Ocean Oxygen Network, the GO2NE group, a collective of researchers convened by the United Nation’s Intergovernmental Oceanographic Commission in 2016. Network scientists detailed the latest survey results in the journal Science.

“Approximately half of the oxygen on Earth comes from the ocean,” said Vladimir Ryabinin, executive secretary of the International Oceanographic Commission. “However, combined effects of nutrient loading and climate change are greatly increasing the number and size of ‘dead zones’ in the open ocean and coastal waters, where oxygen is too low to support most marine life.”

Dead zones in the Gulf of Mexico, Great Lakes and Chesapeake Bay, which can kill large numbers of marine organisms, are growing in size. Additionally, low-oxygen areas are becoming more prevalent. A lack of oxygen can depress growth rates, yielding smaller, less resilient populations of fish species and other marine animals.

Though some species may benefit from a decrease in oxygen, most will not, and the decline is likely to diminish biodiversity in Earth’s oceans.

Global warming is the main cause of diminished ocean oxygen levels. As water surface temperatures rise, the oceans absorb less oxygen and less oxygen is mixed into the interior to the ocean. Reductions in upwelling keeps colder, oxygen-rich water from supplying the surface levels with an influx of oxygen.

Increased runoff of fertilizers have further exacerbated low-oxygen levels by triggering algal blooms. As the microorganisms die and decompose, they rob the water of oxygen, creating massive dead zones.

The only solution, scientists say, is to aggressively address climate change and pollution runoff. Policy makers need to develop better strategies to keep excess fertilizer out of watersheds, and governments need to dramatically reduce greenhouse emissions.

But further reductions in oxygen levels are likely unavoidable, scientists say, so more must be done to protect the most vulnerable fish populations and marine ecosystems.

“This is a problem we can solve,” Breitburg said. “Halting climate change requires a global effort, but even local actions can help with nutrient-driven oxygen decline.”

Local efforts to reduce runoff have helped the Chesapeake Bay watershed reduce nitrogen pollution by 24 percent, avoiding the development of a no-oxygen zone.

“Tackling climate change may seem more daunting, but doing it is critical for stemming the decline of oxygen in our oceans, and for nearly every aspect of life on our planet,” Breitburg said.

Here’s what happens to the human body in Space