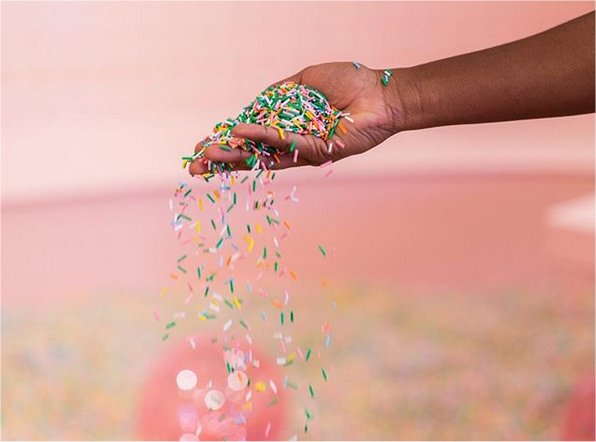 The City of Miami Beach fined the Museum of Ice Cream Thursday, claiming its plastic sprinkles present an environmental hazard.

Guests at the pop-up museum can take photos in a pool filled with tiny plastic sprinkles, which environmental activists say can easily slip into storm drains, travel into waterways and harm marine life.

City officials issued the museum a $1,000 fine and have begun working with the Museum of Ice Cream to ensure the faux sprinkles stay inside the property after activists posted videos about the environmental threat on social media.

Miami Beach spokeswoman Melissa Berthier said the city installed mesh catchers in the storm drains near the museum and has begun conducting regular inspections of the area to check for plastic sprinkles.

Museum of Ice Cream spokeswoman Devan Pucci issued a statement to the Miami New Times Thursday, saying the attraction has taken “immense precautions” to be environmentally conscious including hiring cleaners to sweep around the building.

“Our goal is to continue our sustainable efforts and amplify them to be even more efficient,” she said. “We appreciate the feedback we have received from visitors and the local Miami community and can assure our audience that we don’t take their suggestions lightly.”

Pucci also said the museum is developing a biodegradable sprinkle and plans to install blowers at three different door entrances to ensure guests are free of sprinkles when they exit the building.

The Museum of Ice Cream’s Miami location opened in early December and is scheduled to close Jan. 22.

100 million sprinkles, mean 100 million dreams! Never give up on your biggest and wildest ideas…we promise they’re closer than you think. MOIC started from one dream, a lot of hard work, and a team who believed that ANYTHING was and is possible ✨??#museumoficecream