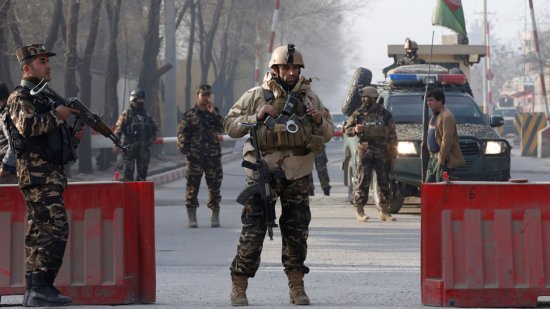 A suicide attacker blew himself up near a crowd of police and protesters in Kabul Thursday, killing at least 11 people and wounding 25 others, officials said, in the latest deadly violence to rock the Afghan capital.

The attack happened during a protest against the death of a shopkeeper in a police operation targeting alcohol bootleggers, an unnamed official said.

“A suicide attacker has detonated himself… close to a number of police who were trying to provide security for an ongoing protest,” deputy interior ministry spokesman Nasrat Rahimi told AFP.

Health ministry spokesman Wahid Majroh told AFP that 11 bodies had been taken to hospitals around the city along with 25 wounded, adding that that the toll could rise.

The Islamic State group claimed responsibility for the attack via its Amaq propaganda agency, according to the SITE intelligence group, which monitors jihadist networks.

Kabul police spokesman Basir Mujahid said the suicide bomber had targeted police officers, five of whom were killed and another 11 wounded.

“He detonated his vest very close to police who were trying to stop the protesters,” Mujahid told AFP.

A security source who spoke to AFP on the condition of anonymity said 20 people had been killed and 20 wounded in the attack, but that higher toll could not be immediately confirmed.

Footage shown on Afghanistan’s Tolo News showed men, purportedly shopkeepers, gathered on a street during the day, angrily denying they were bootleggers.

Afghans are prohibited from selling or consuming alcohol in the Muslim-majority country.

President Ashraf Ghani condemned the “barbaric attack” and ordered an investigation, according to a statement from the presidential palace.