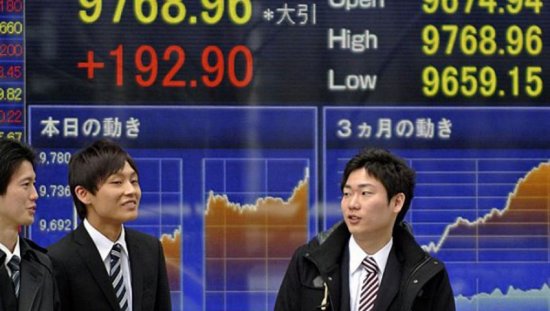 Japan’s Nikkei ploughed more than 2% higher at the beginning of its first trading day for 2018 as investors played catch-up with two days of advances elsewhere.

Like in New York, petroleum-linked plays were the standout as oil prices sprang to three-year highs on the back of a big freeze in the US, tensions between major producers Iran and Saudi Arabia, and a weaker dollar.

Both main contracts jumped around 2% on Wednesday and built on those gains in early Asian exchanges.

“Geopolitics has become a bigger factor now that the Iranian protest movement has launched into the open in the past week,” Greg McKenna, the chief market strategist at AxiTrader, said.

He added: “My sense is there is some expectation that US President Donald Trump may use the protests as a pretext to re-impose sanctions on Iran and possibly unwind the deal the previous administration did, which allowed Iran to increase its exports. McKenna said that would take a significant number of barrels per day out of the market.

Japan’s Inpex was more than 3% higher, while in Sydney, Woodside Petroleum was pumped 2%. In Hong Kong CNOOC, Sinopec and PetroChina all piled on more than 3%.Those gains were mirrored in wider markets.

Tokyo ended the morning session 2.5% up, Hong Kong added 0.1%, putting it on course for an eighth straight gain, while Shanghai added 0.3%. Sydney and Singapore each rose 0.1%, Taipei added 0.1% and Wellington was 0.2% higher.

The positive start to the year for equities follows a stellar 2017 and Shane Chanel, equities and derivatives adviser at ASR Wealth Advisers, was upbeat about the future.

“There is a growing reason to believe that the US market will soon achieve strong economic growth as company expenditure and hiring increase,” he said.

The dollar held on to the previous day’s gains after minutes from the Federal Reserve’s December meeting showed policymakers upbeat about the outlook for the world’s top economy, which could lead to further interest rate hikes.

While analysts said the board was divided over the speed of rises, it was confident Trump’s tax cuts could boost consumer spending.

US moves to block AT&T’s takeover of Time Warner