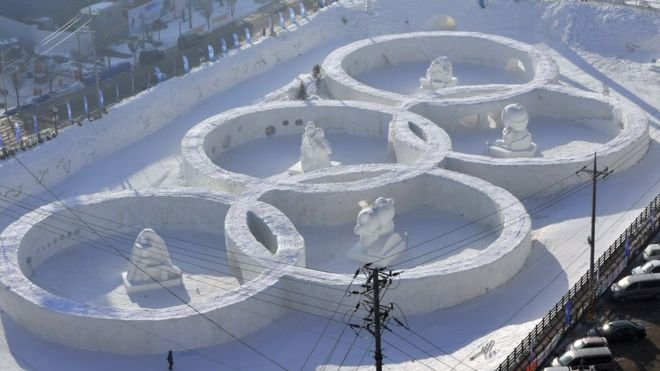 South Korea has offered high-level talks with North Korea on 9 January to discuss its possible participation in the 2018 Winter Olympic Games.

It comes after the North’s leader Kim Jong-un said he was considering sending a team to Pyeongchang in South Korea for the Games in February.

He said the two sides should “urgently meet to discuss the possibility”.

South Korea’s president said he saw the offer as a “groundbreaking chance” to improve relations.

At a cabinet meeting on Tuesday, President Moon Jae-in also said the North’s nuclear programme would be the backdrop of any sporting discussions.

“The improvement of relations between North and South Korea cannot go separately with resolving North Korea’s nuclear programme, so the foreign ministry should co-ordinate closely with allies and the international community regarding this,” said Mr Moon.

The village, in the heavily guarded demilitarised zone (DMZ) at the border, is where the Koreas have historically held talks.

“We hope that the South and North can sit face to face and discuss the participation of the North Korean delegation at the Pyeongchang Games as well as other issues of mutual interest for the improvement of inter-Korean ties,” said Mr Cho.

It is not yet known who will be attending the proposed talks next week – if anyone, as North Korea has yet to respond.

President Moon said he wanted his ministers to act fast to ensure the North’s delegation attended.