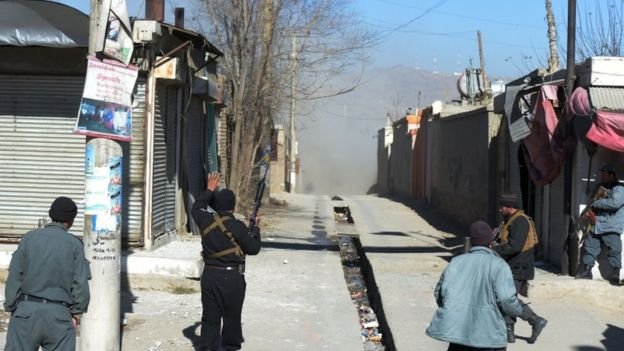 At least 41 people have been killed and more than 80 wounded in a suicide bomb attack in the Afghan capital, Kabul.

A Shia cultural organisation was the target but the Afghan Voice news agency was also hit. So-called Islamic State said it was behind the attack.

The interior ministry told the BBC an explosion at the Shia centre was followed by at least two more blasts.

IS has been behind a number of attacks on Shia targets across the country in recent months.

The main blast went off inside the Tabayan cultural centre, but offices of Afghan Voice are also at the location of the attack.

Students were among those who had gathered at the Shia centre for a discussion forum.

The interior ministry said the event was to mark the 38th anniversary of the Soviet invasion of Afghanistan.

The initial explosion was followed by at least two others, although the ministry said these did not cause any fatalities.

The health ministry’s latest figures say 41 people died and 84 were hurt, with women and children among the casualties.

Student Mohammad Hasan Rezayee told Tolo News: “We were inside the hall in the second row when an explosion from behind took place. After the blast there was fire and smoke inside the building and everyone was pleading for help.”

Sayed Abbas Hussaini, a journalist at Afghan Voice, told Reuters that one reporter at the agency had been killed and two wounded.

Distraught relatives gathered at local hospitals, which are treating the dozens of wounded people.

The Islamic State group said on its propaganda outlet Amaq that it had targeted the Shia centre with a suicide bomber and other bombs.

The Taliban had earlier issued a statement saying they were not involved.

The Taliban are not known to specifically target Shias, although both militant groups have carried out frequent attacks across the country.