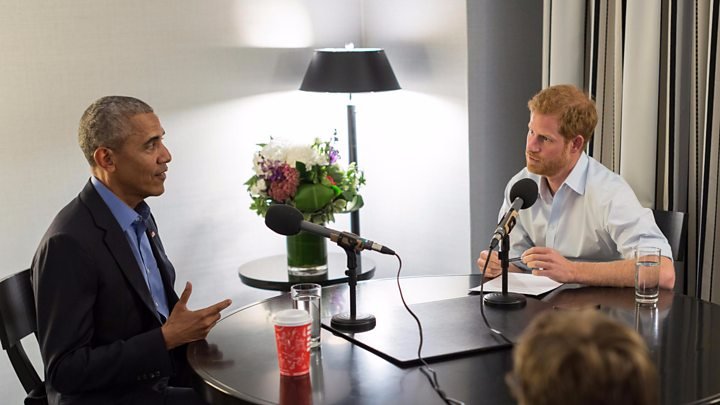 Former US President Barack Obama has warned against the irresponsible use of social media, in a rare interview since stepping down in January.

He warned that such actions were distorting people’s understanding of complex issues, and spreading misinformation.

His successor Donald Trump is a prolific user of Twitter, but Mr Obama did not mention him by name.

Prince Harry, fifth in line to the throne, is one of several prominent figures who are guest-editing the programme over the Christmas period.

The ex-president said those in positions of power should be careful when posting messages, warning that social media is distorting civil discourse.

He expressed concern about a future where facts are discarded and people only read and listen to things that reinforce their own views.

“One of the dangers of the internet is that people can have entirely different realities. They can be cocooned in information that reinforces their current biases.

“The question has to do with how do we harness this technology in a way that allows a multiplicity of voices, allows a diversity of views, but doesn’t lead to a Balkanisation of society and allows ways of finding common ground,” he said.

Mr Trump has been accused of overusing Twitter, though he maintains it allows him to connect directly with the American people.

On handing power to Mr Trump, Mr Obama described mixed feelings, given “all the work that was still undone”.

“Concerns about how the country moves forward but, you know, overall there was serenity there,” he adds.

As well as editing, Prince Harry is himself interviewed on Today.

“I haven’t done that many interviews but it was quite fun, especially interviewing president Obama despite the fact he wanted to interview me.

“It’s been a big learning curve but also these are incredibly important topics we all need to think about and need to be discussed.”

The prince’s programme focused on issues such as the armed forces, mental health, youth crime and climate change.