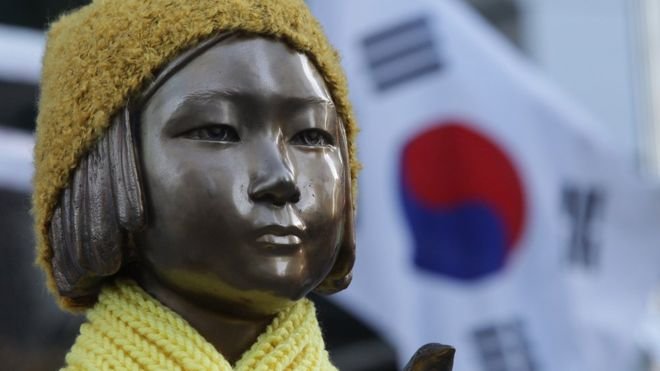 South Korea’s foreign ministry has said a 2015 deal with Japan to compensate forced World War Two sex slaves failed to meet the needs of the victims.

A panel appointed by the ministry said the deal did not take into account the views of the surviving women.

The agreement had been made by South Korea’s previous government hoping to end decades of diplomatic tensions.

South Korean activists estimate that up to 200,000 women were forced to work in brothels for WW2 Japanese soldiers.

Critics have said the deal with Japan was reached without consultation with the survivors – known as “comfort women” – did not contain Japan’s acknowledgement of legal responsibility, and did not provide direct compensation to the victims.

He said the existing agreement “failed to sufficiently reflect a victim-oriented approach, which is the universal standard in resolving human rights issues”.

Under the 2015 deal, Japan had apologised and agreed to pay 1bn yen ($8.8m) to a fund for helping the victims.

The money was to come with an apology by Japan’s prime minister and the acceptance of “deep responsibility” for the issue.

South Korea in turn said it would look into removing the statues symbolising comfort women set up by activists outside Japan’s embassy in Seoul and consulate in Busan.

Activists have installed the statues to draw public attention to the suffering of the women.

The statues have led to diplomatic tensions between Japan and South Korea as well as other countries where such statues have been erected.

The majority of the comfort women were from Korea, while others were from China, the Philippines, Indonesia and Taiwan.

Some were willing, others were lured with the offer of paid work as cooks or cleaners and many were forced, a UN report said.