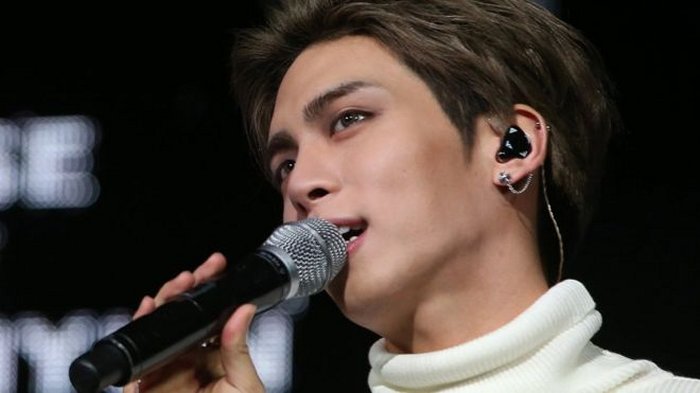 A note said to have been written by K-pop superstar Jonghyun has been posted on social media by his close friend, revealing a struggle with depression.

“The depression that was slowly devouring me at last consumed me,” said the note, posted by fellow singer Nine.

Jonghyun, 27, was found dead on Monday in a suspected suicide.

He was the lead singer of one of South Korea’s biggest pop groups Shinee. His death has triggered an outpouring of grief from fans around the world.

On Tuesday, Nine, a member of another pop group Dear Cloud, shared on Instagram the note she said Jonghyun had sent to her, with instructions to make it public if he “disappeared from the world”.

It spoke about his struggle with living in the public eye, saying “I was broken from the inside” and “the life of fame was never meant for me”.

“What else can I say more. Just tell me I’ve done well. That this is enough. That I’ve worked hard. Even if you can’t smile don’t fault me on my way.”

However, no details were given as to when the note was written or sent to Nine.

On Twitter, his fans have interpreted the message as the singer’s last request to them.

#잘했다 You did well #Jonghyun. ?

Jonghyun, whose full name was Kim Jong-hyun, was found unconscious in a Seoul apartment. He was taken to hospital where he was declared dead.

According to news agency AFP, he had sent several text messages to his sister, including one saying “this is my last farewell”.

Police said they would not be conducting a post-mortem examination, following a request from Jonghyun’s family.

Officers said it “looks certain” that he had killed himself, but did not officially confirm his cause of death as they were still conducting investigations.

The singer was considered by many of his fans to be a very sensitive young man who did not embrace the hedonism that often comes with stardom.

As well as being a singer and dancer, he played a large part in songwriting and production for Shinee. He also launched a parallel successful solo career in 2015.

Fan Wang, a BBC Chinese journalist who worked as an interpreter for Jonghyun during a fan meeting in 2014, recalled that: “Apart from the time he performed, he didn’t talk much most of the time… the thing he cared the most about was his singing and performance.”

Another interpreter who worked with the band told the BBC that Jonghyun “didn’t attract as much attention as other band members when he was offstage. Quiet and reticent, he was always walking behind the others.

“Yet during rehearsals, he came across as a lead singer. He took his singing and dancing rehearsals really seriously – you could tell he was a serious, grounded person.”

“He was also very polite. Once, he’d just finished brushing his teeth when he saw me standing by the door – he hadn’t even dried his mouth yet, but hurried to bow and greet me right away,” the interpreter, who wanted to be identified only as Ms Shu, added.

The management of Shinee, SM Entertainment, released a statement saying he was “the best artist” and that they were “heartbroken” about his death.

The band also posted an emotional tribute to the pop idol on its official Twitter account, saying in Korean: “Jonghyun, who loved music more than anyone…. Forever, he will be remembered.”

Fans were paying their respects at a funeral hall at the hospital in Seoul throughout Tuesday.

Shinee’s other members were there to receive mourners, who included K-pop stars such as singer BoA and members of girl group Girls Generation, reported newspaper The Korea Herald.

A private funeral will be held on Thursday.

Shinee were founded in 2008 as a five member group under SM Entertainment, and quickly rose to become of the biggest K-pop boy groups.

Conceived in South Korea in the 1990s as a Western-Asian hybrid, K-pop is now a multi-million dollar industry.

It is at the forefront of the so-called Korean Wave – the spread of Korean music, drama and film across Asia and worldwide.

Over the past years, Shinee recorded several albums in Japanese and in 2017 sold out the 55,000-seat Tokyo Dome and part of their Japan tour. Earlier this year, they also played their first North American tour.