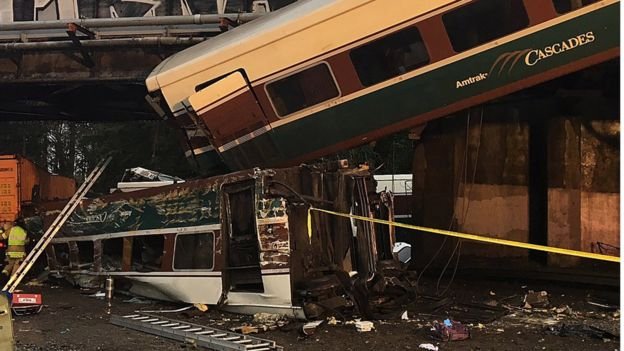 A US passenger train that derailed, killing three people, was travelling at 80mph (130km/h) on a curve with a speed limit of 30mph, data from the train’s rear engine indicates.

It happened in Washington state during rush hour on Monday and officials say 72 people were taken to hospital.

A number of those injured are reported to be in a serious condition.

Authorities said all carriages had now been searched, but would not rule out a rise in the number of dead.

A spokeswoman for the National Transportation Safety Board (NTSB) said investigators had arrived at the scene on Monday night local time and would probably be there for a week or 10 days.

Bella Dinh-Zarr said the 12-carriage train had engines at the front and rear. The back engine’s data recording had been retrieved, she said, and “preliminary indications are that the train was travelling at 80mph on a 30mph track”.

“Our hearts go out to everyone who is affected by this very tragic accident,” she said.

Passengers say the train rocked and creaked as it took the bend fast before barrelling off a bridge on to a motorway packed with traffic.

Seven vehicles, two of them lorries, were hit on the I-5 highway below. Several people were injured in their vehicles but none died.

State transport spokesperson Barbara LaBoe was quoted in the Seattle Times newspaper as saying the limit on most of the track was 79mph (128km/h) but drivers were supposed to slow dramatically at the spot where the train derailed.

She said warning signs were in place two miles before the lowered limit.

It was Amtrak’s first passenger service to run on a new, shorter route. Amtrak is the name of the company that runs most passenger trains in the US, with some government funding.

The derailment happened on a section of track previously only used for freight trains.

A safety system called Positive Train Control (PTC) was not operational on the train in question, the president of Amtrak told reporters. Using GPS tracking, PTC automatically warns the driver of speed limits and other local conditions and applies the train’s brakes if the warnings are not heeded.

Congress originally legislated for PTC to be installed by the end of 2015 but it is still not even halfway complete.

The cost of implementing the system fully on all tracks and vehicles is reported to be more than $22bn.

One passenger carriage could be seen dangling from the bridge, while others were strewn across the road and the wooded area next to the track.

There were 86 people on board, including 77 passengers and seven Amtrak crew members, as well as a train technician.

Police say 19 people were taken from the scene uninjured. Of the 72 transferred to hospital for evaluation, 10 were considered to have serious injuries.

A recording of the train’s emergency call to railway dispatchers was released to US media.

“Emergency! We are on the ground!” a man, possibly the conductor, radios in.

In a second radio call, another crew member reports that only the rear unit remains on the rails.

“All other cars appear to be on the ground in quite a mess,” he says.

The train’s driver has a head injury, he tells dispatchers.

President Donald Trump’s first reaction to the derailment was to tweet that it showed the need for his forthcoming infrastructure plan.

However US media outlets pointed out his submitted federal transportation budget actually proposed cuts to funding to national rail systems.

He later added that his thoughts and prayers were with those involved.

The section of track where the crash happened has been recently rebuilt and upgraded using federal funds.

Washington’s governor has declared a state of emergency in two counties.

Passenger Chris Karnes, on board the train, said his carriage had careered down an embankment then come to a stop: “We could hear and feel the cars crumpling and breaking apart, and water came out from the ceiling.”

“In order to get out… we had to kick out the emergency window,” he added.

Governor Jay Inslee said he was praying for the many injured.

Officials set up a family reunification centre at DuPont city hall and asked people not to come to the scene of the crash.

A local news reporter who was on the train, but got off at a stop just before the crash, said many of those on board were railway enthusiasts, keen to experience the first high-speed train on the new route.

Every passenger was given a commemorative lanyard and badge to mark their journey, he said.

An Amtrak official at the scene said the company would “do everything in our power” and “spare no expense” in supporting the passengers, employees and families affected.