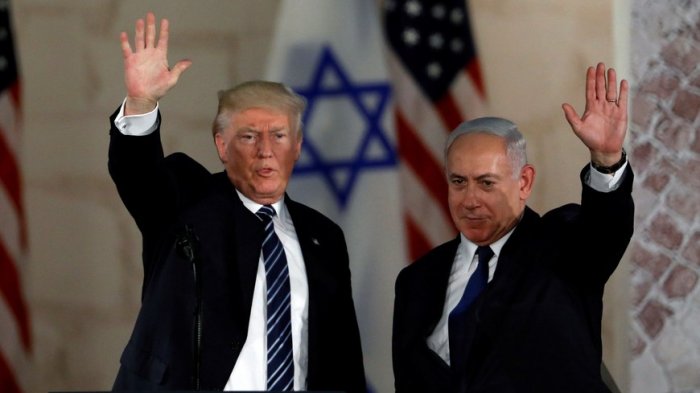 An expected announcement by President Donald Trump that the US will become the first state to recognise Jerusalem as Israel’s capital has prompted global reaction ranging from concern to alarm.

Palestinians said it would be a “kiss of death” for the Middle East peace process, but an Israeli minister urged other countries to follow the US lead.

Mr Trump is likely to confirm the decision in a speech later.

He will also approve moving the US embassy to Jerusalem, US officials say.

The transfer of the embassy from  will, however, be delayed because of logistical and security issues, as well as the need to find a location.

The Palestinians’ representative to the UK, Manuel Hassassian, told the BBC that the changes to US policy on Jerusalem were akin to “a declaration of war” on the Middle East.

Israeli Prime Minister Benjamin Netanyahu has yet to comment officially, but Education Minister Naftali Bennett described it as a “big step towards regional peace” and said other countries should move their embassies too.

He added that it would force Israel’s “enemies” to accept that Jerusalem would never be divided.

But Pope Francis called for the “status quo” to be respected. Dialogue would only come through “recognising the rights of all people” in the region, he said.

And UK Foreign Secretary Boris Johnson said he viewed the reports of what Mr Trump would say “with concern”, echoing comments by France and the European Union.

Israel has always regarded Jerusalem as its capital, while the Palestinians want East Jerusalem to be the capital of a future Palestinian state.

In recognising Jerusalem as Israel’s capital, the US becomes the first country to do so since the foundation of Israel in 1948.

The issue goes to the heart of Israel’s conflict with the Palestinians, who are backed by the Arab and wider Islamic world.

The city is home to key religious sites sacred to Judaism, Islam and Christianity, especially in East Jerusalem.

Israel annexed the sector from Jordan after the 1967 Middle East war and regards the entire city as its indivisible capital.

According to the 1993 Israel-Palestinian peace accords, its final status is meant to be discussed in the latter stages of talks.

Israeli sovereignty over Jerusalem has never been recognised internationally and all countries maintain their embassies in Tel Aviv.

Since 1967, Israel has built a dozen settlements, home to about 200,000 Jews, in East Jerusalem. These are considered illegal under international law, though Israel disputes this.

In recognising Jerusalem as Israel’s capital, the US could reinforce Israel’s position that settlements in the east are valid Israeli communities.

Trump administration officials said recognising Jerusalem as Israel’s capital was an acknowledgment of “historical and current reality” by the US government.

However, specific boundaries of the city would remain subject to a final status agreement, the officials said. The status of holy sites would not be affected.

Mr Trump would also direct the state department to begin the process of moving the US embassy to Jerusalem – but this could take several years as it still has to be designed and built and security concerns would need to be addressed.

He originally promised the move to pro-Israel voters during his campaign for the presidency.

The US officials added that the president would still sign a regular waiver blocking the embassy’s move from Tel Aviv to Jerusalem until the new building was completed.

Successive presidents have signed waivers on the grounds of national security for the 1995 Jerusalem Embassy Act, which mandates moving the embassy.

Mr Trump has vowed to pursue a peace agreement between Israelis and Palestinians, led by his son-in-law and top adviser Jared Kushner.

An administration official said the new US policy on Jerusalem was not designed to favour Israel in that process.

US government employees and their families have been barred from personal travel in Jerusalem’s Old City and the West Bank for security reasons ahead of expected protests.

Jordan urges US not to recognise Jerusalem as Israel capital