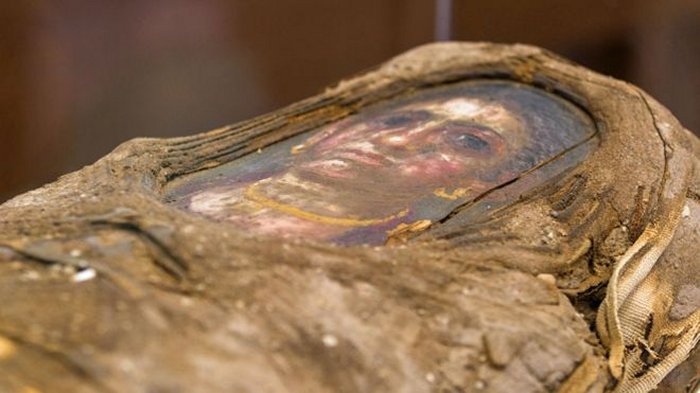 Scientists at a leading laboratory in the United States are using a cutting-edge form of X-ray to scan inside an Egyptian mummy that has never been unwrapped since its excavation a century ago.

This is the first time that such a high intensity synchrotron X-ray will have been used on a mummy, with the aim of producing an extremely detailed three-dimensional analysis of the body and any other objects hidden below the linen bindings.

This is also an unusual mummy, because not only has the body been preserved, but so too has a portrait of the child’s face.

This mummy, from a collection on the campus of Northwestern University in Chicago, is believed to contain the body of a five-year-old girl, who died about 1,900 years ago.

Not only was her body mummified, her portrait was painted and placed on top of the cloths wrapped tightly around her.

It’s one of only about 100 such “portrait mummies” known to exist intact, with the Egyptian process of mummification being accompanied by the Roman style of portraying the dead.

The painting provides an unusually intimate image of how the girl once looked – and the scanning project is trying to reveal much more about her life and death, without disturbing any of the layers of cloth around her body.

Marc Walton, research professor of materials at the McCormick School of Engineering at Northwestern, told the BBC it’s “quite emotional when one realises how young this child was at the time of her death”.

Prof Walton says the investigation so far suggests that she had been “relatively healthy and that she didn’t have any blunt force trauma that could explain her death”.

He says that the most likely cause of death was a disease such as malaria or measles.

The mummy had been excavated in 1911 by the English archaeologist, Sir William Flinders Petrie, in Hawara in Egypt, and was brought the following year to a college in Chicago.

Since then, the mummy has been put on display and appeared in exhibitions, but has been left intact, unlike many that were cut open.

But this year, for the first time, researchers have begun looking inside.

In the summer, the mummy was taken from its current home, the Garrett-Evangelical Theological Seminary, on the Northwestern University campus, and brought to a hospital in Chicago for a preliminary CT scan.

Then last week, the mummy was brought to the Argonne National Laboratory, a top research centre operated by the University of Chicago for the US Department of Energy.

The mummy became the first to be examined using synchrotron X-rays. This process sends narrow beams of intense light to map any structures below the surface.

Medical researchers want to examine the bone tissue and teeth. The investigation is at an early stage, but there are also questions about what seems to be an object inside the skull, presumably after the brain was removed as part of the mummification.

Prof Walton says it seems to be “pooled resin from the embalming process” which has settled in the back of the skull.

The researchers are hoping that this will tell them something about the positioning of the body and the process of mummification.

There are also signs of some kind of wire around the head and feet.

But Prof Walton suggests these might be modern pins, rather than ancient artefacts, perhaps inserted after or during the excavation in 1911.

“We are still trying to understand their exact purpose in holding together the wrappings,” he says.

The synchrotron X-rays will allow researchers to look at the interior structure of anything inside the mummy in a much more detailed way than other forms of scanning, says Prof Walton.

The US Department of Energy says the “ultra-bright, high-energy” X-ray beams, produced at its laboratory, can examine structures and materials at a nanotechnology level “where scale is measured in billionths of a metre”.

“The thing that is of interest to me most personally is the bone that is present,” said Prof Stuart Stock from the Feinberg School of Medicine at Northwestern University.

“This is the mummy of a five-year-old child. We’re interested from a medical perspective in the quality of the bone. Has this bone changed with time? We can start to build up a database of how ancient bone compares to modern bone,” said Prof Stock.

He is hoping to find much more than from a conventional CT scan. “We want to know what materials are present and this will tell us something about the processes used to prepare the mummy, and things that had been done later to stabilise the mummy.”

They also want to know more about the young child below all of these historical layers.

Taco Terpstra, assistant professor of history at Northwestern, says about half of children at that time did not live to their 10th birthday.

Prof Walton says that the girl’s portrait and a “relatively lavish burial” suggests that “she must have had an elite status within the village”.

He is curating an exhibition at the Block Museum at the university showing these lifelike mummy portraits.

It’s called, Paint the Eyes Softer: Mummy Portraits from Roman Egypt, with the title taken from an instruction written in Greek on the back of one of these pictures, that told the artist to “paint the eyes softer”.

Now this young, solemn face, looking back from an ancient civilisation, is being investigated by the most ultra-modern technology.