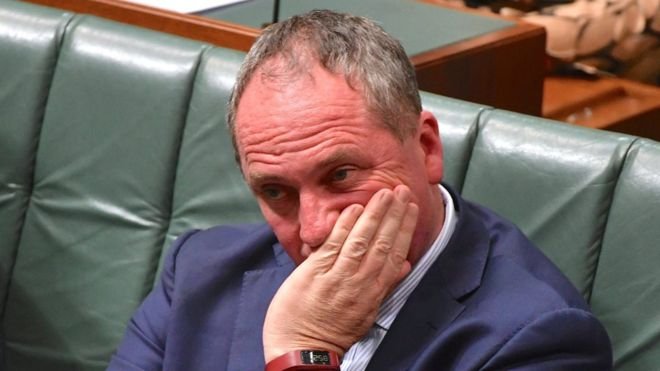 The term “kwaussie” – a hybrid of Kiwi and Aussie – has been named Australia’s word of the year.

The portmanteau came to prominence in 2017 through the nation’s dual citizenship political saga, said the Australian National Dictionary Centre.

It describes a person who is a dual citizen of Australia and New Zealand – as was the case with Australia’s deputy prime minister, Barnaby Joyce.

Mr Joyce was removed from office in October for being a kwaussie.

He won back his seat in a by-election on Saturday after renouncing his New Zealand citizenship. Under Australia’s constitution, politicians cannot be dual citizens.

“In a time of covfefe, fake news, and tweetstorms, the Australian National Dictionary Centre has looked for a word of the year that is both lexically interesting and Australian.”

Although popularised by the political saga, the word can also refer to a New Zealander living in Australia, or a person of Australian and New Zealand descent, she said.

Friendly rivalry between Australia and New Zealand has often led to minor quibbles over claims to famous citizens.

Dr Laugesen said kwaussie was primarily used in Australia and on social media to refer to Mr Joyce and Mr Ludlam, and the eligibility saga.

Last year, “democracy sausage” was chosen as Australia’s word of the year – a nod to a local election-day tradition.

In November, dictionary publisher Collins chose the phrase “fake news” as its word of the year.

The Australian National Dictionary Centre said the words shortlisted in 2017 reflected many events that shaped the nation’s political, cultural and social landscape: