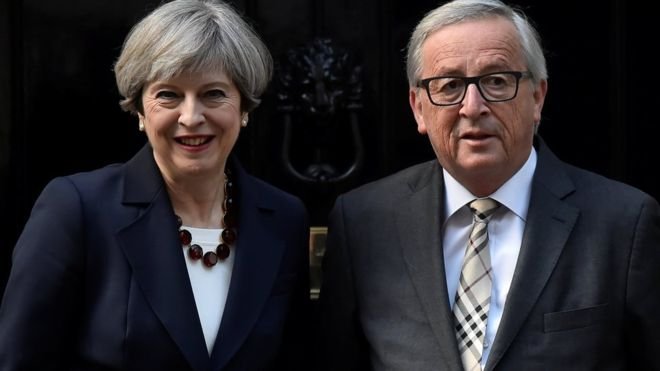 Theresa May is set to meet key EU figures for talks on Brexit which could determine whether the UK is able to move on to negotiations on trade.

The BBC understands deals on the UK “divorce bill” and citizens’ rights were reached this weekend.

But the UK border with Ireland remains an outstanding issue.

The PM will meet European Commission president Jean-Claude Juncker in Brussels, with Downing Street saying “plenty of discussions” lie ahead.

The timings of Mrs May’s visit marks a deadline set by Donald Tusk, the president of the European Council, for her to come forward with an improved offer on the terms of the UK’s withdrawal from the EU.

The UK is hoping to start talks about a free trade agreement but the EU says it will only recommend this can take place when it deems “sufficient progress” has been made on the other issues.

The UK voted for Brexit last year and is due to leave in March 2019, but negotiations between the EU and the UK have not yet reached a breakthrough.

Mrs May will be accompanied by the Brexit Secretary David Davis for the discussions with Mr Juncker and Mr Tusk.

Downing Street has described the meeting as an “important staging post” on the route to the “crucial” summit with the other 27 leaders in the middle of the month when it hopes trade talks can begin.

However, Mr Tusk has stated Dublin must be satisfied there will be no return to a “hard border” between Northern Ireland and the Republic after Brexit, before the EU moves on to the next stage of negotiations.

On Sunday, there were warnings from Tory Brexiteers not to give any more ground to Brussels.

Mrs May’s meeting comes as the EU withdrawal bill returns to the Commons for a fourth day of debate.

Meanwhile, Health Secretary Jeremy Hunt has warned there will be no Brexit at all unless Mrs May is supported.

His comments came after a series of prominent Conservatives including Jacob Rees-Mogg, John Redwood and former chancellor Lord Lawson signed a letter calling on Mrs May to refuse to settle the UK’s “divorce bill” unless Brussels agrees to a series of demands.

These included ending the European court’s jurisdiction the moment the UK leaves in March 2019.

The prime minister has promised that Brexit will end the jurisdiction of the European Court of Justice in the UK. But she has suggested its remit might continue during an “implementation period” after this date.

The talks so far have focused on what happens to citizens’ rights after Brexit, the amount of money the UK will pay, and the future of the Irish border.

On the “divorce bill”, the UK is understood to have recently increased its offer, which could be worth up to 50bn euros (£44bn).

There has also been lots of focus on the Ireland question in recent weeks, with the Irish government seeking more information on the “frictionless border” the UK wants to establish so customs checks are not needed.