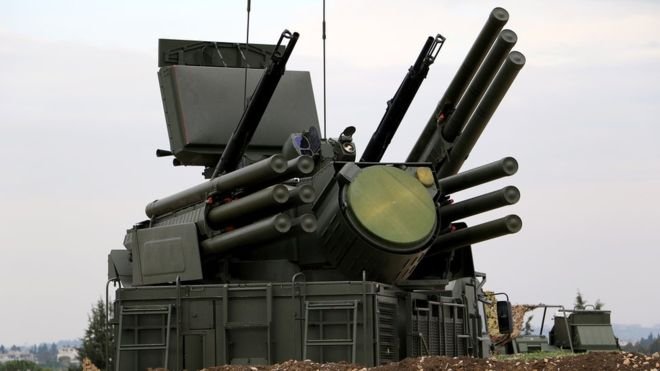 The attack caused damage but two missiles were intercepted, it added.

The Israeli military has not confirmed it carried out the strike.

UK-based monitoring group the Syrian Observatory for Human Rights earlier reported explosions near Damascus, which it said were caused by a suspected Israeli missile attack.

The extent of the damage is not yet clear although the TV report spoke of “material losses” at the base.

Head of the Syrian Observatory, Rami Abdel Rahman, told the AFP news agency the strike destroyed an arms depot – but his group did not know who it belonged to.

Israel has hit weapons sites before, in a bid to prevent arms being transferred to Syria’s Lebanese ally Hezbollah. Arms convoys in particular have been singled out by the Israeli air force.

According to the Syrian Observatory the attack took place near El-Kiswah, a few miles south of Damascus.

Last month the BBC revealed a claim that Iran was building a permanent military base near the town.

A series of satellite images showed construction at the location of the alleged base, which was made known to the BBC by a western intelligence source.

Israeli Prime Minister Benjamin Netanyahu has previously warned that Israel would not allow Iran to establish any military presence in Syria.

Jordan urges US not to recognise Jerusalem as Israel capital