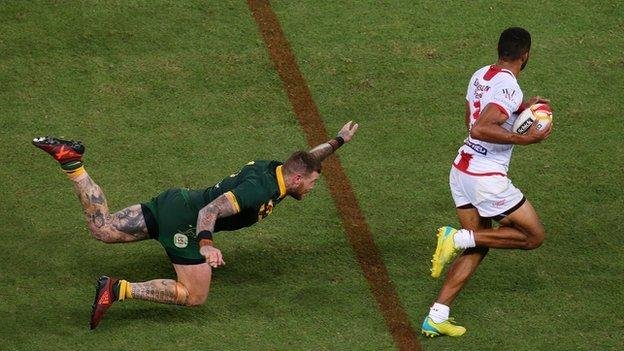 Australia edged out England in a tight and nervy Rugby League World Cup final to retain the trophy at Suncorp Stadium in Brisbane.

England produced a dogged and resilient performance in their first final for 22 years, but the Kangaroos held on to win an 11th world title.

Boyd Cordner smashed through for the only try of the game as England restricted Australia to six points.

They had chances of their own, but could not breach the hosts’ defence.

There was no moment that summed this up more than a desperate but brilliant ankle tap by Josh Dugan on Kallum Watkins in the second half after the England centre had broken through.

It was a monumental effort from England against a team who came into the game as overwhelming favourites.

Having lost to Australia 18-4 in their opening game, Wayne Bennett’s side both improved and impressed during the World Cup, holding off Tonga 20-18 for a memorable semi-final win before this thrilling final.

Australia’s victory, though, completed a World Cup double for the country, with the women’s team having beaten New Zealand 23-16 earlier.

England were forced to soak up wave after wave of Australian attacks in the first half as the Kangaroos built relentless pressure, completing 23 of 25 sets before the break.

Only a five-minute spell of indiscipline cost Bennett’s side, a high tackle from Luke Gale starting a spell in which Australia enjoyed four straight sets.

Watkins fumbled a Cooper Cronk kick over his own line and Ryan Hall caught another as England were forced into back-to-back in-goal dropouts, before James Roby was pulled up for another penalty.

From there, Australia made them pay. Aaron Woods drew in several tacklers but managed to get an offload away and the Kangaroos capitalised as back-rower Cordner hit the line at speed to crash over.

Michael Morgan thought he had added to Australia’s lead after the interval when Dugan caught Gale’s cross-field kick beyond his own touchline and broke clear to set the field position, before Jordan McLean put Morgan over.

But referee Gerard Sutton called it back for an obstruction by Cameron Smith, and from then on England looked the more likely to cross.

Jermaine McGillvary was superb on England’s right but the dangerous Huddersfield winger could not find the gaps to add to his seven tries in the tournament, while the Watkins ankle tap was arguably the game’s most dramatic moment.

England assistant coach Denis Betts said in the build-up to the game that “nobody ever remembers the losers” – but the man who captained the team in their last World Cup final defeat may change his mind after a mammoth effort.

The bookmakers had the Kangaroos as 1-7 favourites, but there was certainly not that margin between the teams as England produced a solid defensive display and Australia looked to be out on their feet come the final whistle.

Many did not expect England to reach this stage – but, having reached the final, Bennett’s team gave a great account of themselves.

Gareth Widdop caused problems as he joined the line from full-back, as well as reading Australia’s kicking game and positioning himself superbly in defence, while captain Sam Burgess, along with James Graham, led a ferocious forward pack in the absence of experienced skipper Sean O’Loughlin.

It may have been a different story but for that Dugan ankle tap on Watkins, and had England’s execution been better at key moments, McGillvary spilling in a good position in the first half and Gale passing behind John Bateman in the second.

England international Sam Tomkins, not selected for the tournament, said it was “a missed opportunity” for the team.

“We could have won that with just a matter of minutes left,” the Wigan Warriors full-back told BBC One.

“I don’t think we have played them in the last five or six years and got that close, one ankle tap, one moment, but we are making strides.”

It might not be an Australia side to rival some of their greatest over the years, but there can be no arguing the Kangaroos are deserved world champions having won six games from six and conceded just 16 points.

It is also a side that has witnessed legends such as Cronk, Smith and Billy Slater, the latter two of whom played in the side stunned by New Zealand in the 2008 final in Brisbane.

Kangaroos captain Smith, who won the 2017 NRL Grand Final and State of Origin for Queensland alongside Slater and Cronk, said this was “one of the toughest games I have played in my career”.

“The three of us have had a remarkable year for club, state and country. If this is the last time we get to play together what a special memory to have,” the 34-year-old added.

Full-back Slater has come back from multiple shoulder operations to return, but said at the final whistle he “will probably retire” at the end of next season and may have played his last game for his country.

As for Cronk, the 33-year-old playmaker was at his creative best against a resilient England defence and his game management proved key to shutting down the game late on.

He later confirmed it would his last appearance in green and gold.

“I’ve had a fair ride,” said Cronk. “This is the best-case scenario for me and the team moving forward.”

Bennett said before the game that reaching the final was his target when he took charge two years ago.

The Australian’s contract with the Rugby Football League is effectively now up, and he is yet to commit to a new deal.

Asked about his future following the defeat, Bennett said: “I’m not talking about that tonight, I’m not in a good state to talk about those things.”

England, with or without Bennett, will take confidence from their best performance at a World Cup in 22 years as they head into a three-match Test series with the Kiwis next autumn.